As far back as December, ethnic Asians in Ireland have reported discrimination fuelled by the Coronavirus. 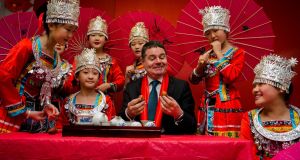 Minister for Finance, Paschal Donohoe TD with children from the Chinese community during the launch of the Chinese New Year Celebration’s in January. Photo:Gareth Chaney/Collins

The spread of Covid-19 brings with it many challenges; how to protect society, the economy and the nation being at the forefront of our minds. It is true to say that Covid-19 has had an unprecedented impact on all of us, and it is likely to continue for some time. This virus brings with it fear;fear of the unknown, fear for our loved ones and fear of how to economically ride out this wave of turbulence.

One of the less mentioned impacts of the Coronavirus is the increasing discrimination against the Chinese and Asian community as a whole across the world. At this point, each of us is likely to have experienced the emotion of fear brought on by the pandemic. However, it is important to realise that for some people such fear can foster discrimination.

Numerous cases have been reported that are directly linked to Covid-19 discrimination. In the UK a young man from Singapore was attacked by four males who told him ‘we don’t want your coronavirus in our country’, he suffered a broken bone near his eye that had to be operated on. In New York city video footage emerged of a man on the subway spraying air fresher at an Asian-American passenger. The police department in New York are investigating this as a possible hate crime.

It has also been reported that a Vietnamese art curator was cancelled by an exhibitor in the UK who felt the curator’s participation would be seen as ‘carrying the virus’. In Germany, a woman took to twitter stating that ‘coronavirus-related racism is real’. She details how she was in a hospital near Stuttgart and a middle-aged German man saw her toddler and said ‘Der hat einen Corona Einschlag!’ translating to ‘he looks a bit like a Corona!’.

It seems that xenophobia is being triggered by the pandemic, and unfortunately Ireland is no exception. We have seen an increasing surge of racism since the coronavirus hit. As far back as December, ethnic Asians in Ireland have reported discrimination fuelled by the Coronavirus. A young woman was attacked in Dublin by a group of girls shouting, ‘you brought the virus here’, while another person said a friend had experienced people shouting the words ‘virus, virus’ at her.

A man from South Korea detailed his experience on the dart, where despite the dart being full, no one would sit beside him, opting to stand instead. He noted that ‘I definitely feel a change in the way people look at me’.

Trinity Business School is currently collaborating on research with colleagues in the UK on the impact of the pandemic on international students. The majority of Chinese students have reported experiencing acts of discrimination and racism brought on by the Covid-19 outbreak. For example, a Chinese student studying in Dublin was verbally abused on the Luas by three male teenagers who told him he brought the virus to Ireland. The student was afraid to defend himself because he was outnumbered. Since the incident, the student has not left his accommodation for fear of further abuse.

It is normal to feel fear during this pandemic, but we as a country must carefully consider what that fear evolves into. We should not allow our fear to create a vortex of negativity against others. We have a large Asian community living in Ireland and born in Ireland, as a nation let our focus be on helping each other as a community.

We must not allow emotions cloud our better judgement and feel that discrimination is justified. Leo Varadkar said ‘we are in this together’ and that should not be dependent on cultural origin.

Dr. Eimear Nolan is an Assistant Professor in International Business at Trinity Business School Trinity College Dublin, where she lectures in Cross-Cultural and Inter Cultural Management.