Behind all the marching, parties must tackle the underlying issues 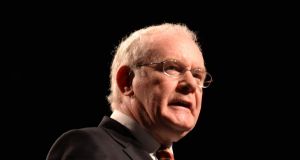 About an hour after the north Belfast Orangemen dispersed and went home in the rain on Saturday night, local SDLP Assembly member Alban Maginness issued a statement welcoming a peaceful end to the Twelfth. “This reflects a great deal of work undertaken by political and community representatives in the run-up to today,” he said.

Implicitly included in that statement was praise for the Orange Order, unionist and loyalist leaders who, against earlier anxieties it must be said, ensured that for the first time in recent years there was no violence in north Belfast on the Twelfth Night.

On Saturday night, the Sinn Féin Deputy First Minister Martin McGuinness tweeted: “Pleased today’s Orange O parades passed peacefully. Parades Commission determination & those who mainly abided by it delivered.” Again that was fair, but the thrust from Sinn Féin was one of criticism of the Orange Order for alleged breaches of Parades Commission rulings elsewhere.

At the time of writing, the Sinn Féin post-parade response did not reflect the great sense of community relief that there wasn’t major violence at the north Belfast interface beside the Ardoyne shops, as there was from loyalists and Orangemen last year when the Orange Order parade was barred from parading past the shops, and as there was from republicans in previous years when it was permitted.

Maybe that generosity of republican spirit will come later.

What seems clear is that unionist and nationalist politicians have a duty to build on what was achieved in north Belfast on Saturday evening.

And it was an achievement, because PSNI chief constable George Hamilton didn’t deploy 3,500 police officers to cover the Twelfth – 1,100 operating in a small area of north Belfast – for the hell of it.

Up until 7.20pm on Saturday when Orangemen and loyalists turned around near the top of Woodvale Road and went home peacefully, nobody knew what we were in for both in north Belfast and in other sectarian flashpoints.

In the end the “guarded optimism” proved correct, but it could have gone dangerously awry.

So finally, applying the usual caveats, we seem to have got safely beyond the apex of the marching season. That’s very good. Now it should be back to politics. But therein lies a problem, with the combined unionist group pledging that, in the coming weeks and months as part of its “graduated response”, it will ratchet up protests against the Parades Commission decision on the Ardoyne parade.

It doesn’t have to be like that. There is an alternative, and that is the parties meaningfully returning to the talks on the emotive issues of parades, flags and the past – which is what the last few worrying weeks were about.