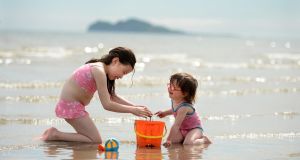 Many parts of Ireland enjoyed the warmest and sunniest May bank holiday weekend in years.

Temperatures reached 23 degrees in the Phoenix Park on Sunday. It was still an impressive 22.1 degrees on Monday in the same location.

By contrast, along the south and westerly coasts temperatures struggled to get into single figures with a high of just 11.8 degrees in Roches Point in Cork.

The bad news is that there will be a return to the distinctly cool temperatures of recent weeks.

Rain spreading from the west overnight will reach the east coast by Tuesday morning. There is a possibility of a 16 degrees on Tuesday afternoon, but that will be as good as it gets.

“The forecast for the rest of the week is cool,” said Met Éireann forecaster Joan Blackburn. “As we go through the week, it is going to get more and more unsettled.”

It will be rainy and windy in most places with heavy rain forecast for Friday. The weekend is also looking cool and changeable.