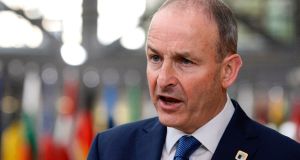 It will take until 2063 at the current rate of progress to achieve parity between male and female representation in the Dáil, the Citizens’ Assembly has heard.

Dr Yvonne Galligan of the Technical University Dublin said quotas for national elections were introduced in 2012, but the number of female candidates had remained static at 31 per cent in the past two general elections.

The assembly also heard calls for the introduction of gender quotas in the media, academia and at board levels in commercial and State organisations, as well as for the extension of political quotas from general elections to local and Seanad elections.

Submissions to the assembly stated that women in leadership positions were held to different standards than men and cited a lack of provision for childcare in the houses of the Oireachtas, which made the demands of political office incompatible with family life.

The under-representation of women in the media is leading to a lack of gender balance in media programming, a lack of coverage of women’s sport and the stereotyped representations of women and girls, members of the assembly were told in a summary of the submissions, collated by Dr Pauline Cullen of Maynooth University.

The submission recommended gender quotas in media and gender-sensitive policies and programmes in media organisations. Another suggestion was that there be legislation to prohibit abuse of women on social media.

The under-representation of women in leadership positions in higher education should be tackled by introducing quotas and improving transparency in recruitment processes.

There were 109 submissions to the assembly from organisations and individuals.

Men’s Voices, which argued that there should be a men’s equivalent of the National Women’s Council, and the Stop Segregation of Men also made submissions.

Speaking in advance of the second session of the assembly, which was held online because of Covid-19, Taoiseach Micheál Martin said previous citizens’ assemblies has brought forward “progressive societal changes”.

“You now have an opportunity to shape the Ireland of the future,” he told the 99 citizens, who were meeting for the second time and the first time virtually as a result of Covid-19.

The Citizens’ Assembly on gender equality was established by the Oireachtas last year and is chaired by Dr Catherine Day, a former secretary-general of the European Commission.

Its recommendations will come before the Dáil and Seanad once it is finished in early 2021.

“We will be responding to each of your recommendations,” Mr Martin said. “They will be taken very seriously and considered carefully.”

The members of the assembly also heard from the Australian group Male Champions of Change, which campaigns for equality between men and women.

Its founder said it was established because “men seem to be missing from the picture” in relation to the issue of gender equality.

“If we want to work with power, we have to work with those who have power – and that is men – to take the message of gender equality to other men.”