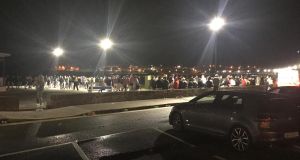 The scene at the harbour in Kilkee on Saturday night.

Nine people were arrested for public order offences following scenes of rowdiness in the west Clare seaside town of Kilkee.

Three men were charged and are due to appear before Kilrush District Court (sitting in Ennis) on 15th September 2020.

Two male youths were released and will be dealt with by way of the Youth Diversion Programme.

Two men and one woman have been dealt with by way of adult caution and one man was released without charge. All nine were detained for a time at the local garda station.

Hundreds of young people gathered at the harbour in Kilkee on Saturday night, leaving behind them a trail of destruction.

Cllr Cillian Murphy said he had never seen such a level of antisocial behaviour in 30 years living in the town.

“Council workers were out from 6.30am on Sunday morning cleaning up the mess, with smashed bottles, empty cans and plastic bags everywhere along the sea front.

“By 8am they had the worst of it sorted but it really had to be seen to be believed,” he said.

About 300 teenagers gathered in the town on Saturday night. Footage posted on social media app TikTok shows them packed into the bandstand. None were observing social distancing or wearing masks.

Cllr Murphy said those involved were a mixture of locals and teenagers whose families were holidaying in the town.

Kilkee on Saturday night, like a lot of seaside resorts in Ireland, was “packed”, he explained.

“We are absolutely rammed to the doors. We have a lot of people who would not normally be in Ireland during the summer and are coming here. A lot of these teenagers would be going abroad.”

He said Saturday night’s events happened while the Department of Education was “jumping through hoops” to get children back to school in September.

“We have a whole bunch of school-going kids caring not one whit. There is parental responsibility not being taken here.

“There are young kids, they are out late and there is a lot of alcohol involved. There is a bigger question to be asked as to how people behave when they are on holidays.”

Clare County Council has appealed to all members of the public to act responsibly this August bank holiday weekend.

The bandstand at Kilkee was closed on Sunday night to avoid a repeat of what happened on Saturday night.

Council chief executive Pat Dowling said young people must remember that they too can contract the coronavirus.

“Furthermore, anyone not adhering to the guidelines risks transmitting the virus to more vulnerable members of their families and communities, for whom the consequences may be dire,” he added.

“There must be no repeat occurrence of the scenes shown on social media, in Kilkee or anywhere else in Co Clare.”