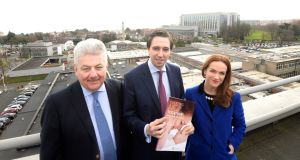 This weekend, over five years after the project was unveiled to great political fanfare, not a brick has been laid in the development of Ireland’s long-planned new national maternity hospital.

Indeed there are fears that the €300 million project could be close to the point of collapse, or at least be facing serious delays that put its future in question.

Senior figures in the existing National Maternity Hospital in Holles Street in Dublin, who have been anxious for years to secure a move from the current cramped facilities, are concerned that the plan to relocate services to the campus of St Vincent’s University Hospital, could fall apart if it does not receive the official go-ahead from the Minister for Health Simon Harris within the next three weeks.

The latest twist in a saga with political, financial and even familial storylines centres on a new requirement put forward by the Minister for a public interest director to be added to the company that will run the new maternity hospital.

As dealbreakers go, it does not seem all that significant. Yet it has been claimed that unless the latest row is resolved and the Department of Health provides about €22 million in funding to allow construction of the first parts of the facility to commence before the end of the year, new EU building rules could force the project to be redesigned, escalating the cost further and potentially threatening its future entirely.

Sources say the authorities in Holles Street are prepared to go along with the new proposals put forward by Harris but want more time to assess the legal documents provided by the Department of Health in late October and will not be in a position to sign up in advance of the end-of-year deadline.

The Department of Housing, Planning and Local Government told The Irish Times on Friday that the energy performance of buildings directive required that new buildings occupied and owned by public authorities had to be classified as built to nearly-zero energy standards after December 31st, 2018.

On Friday, sources on all sides were expressing optimism that the standoff could be resolved in the coming weeks. But the impasse is only the latest controversy to beset a project that has been dogged from the start.

Holles Street and the St Vincent’s Healthcare Group, which operates the public St Vincent’s University Hospital and the adjacent St Vincent’s private hospital on its campus at Elm Park in Dublin 4, reached agreement on the move two years ago after years of public disagreement.

This followed a mediation process under the former head of the Labour Relations Commission, Kieran Mulvey.

While the latest issue stems from the Minister’s proposals for the public interest director – which was not included in Mulvey’s compromise deal, many other fault-lines exist in the long-running saga – between two powerful, independent hospitals asserting their independence and control; between voluntary hospitals and the Health Service Executive; and between the department and Holles Street where relations have become strained.

Then there is the issue of church and State – the fact that St Vincent’s is owned by the Religious Sisters of Charity has been the subject of intense public debate over the past two years, although the Department of Health, Holles Street and St Vincent’s all say that the nuns have no say or role in influencing healthcare in any way. Nevertheless, a demonstration against religious involvement in the hospital will take place in Dublin on Saturday.

Finally, money is also an important factor. A relocated maternity hospital on the St Vincent’s hospital lands in leafy south Dublin promises to be a money-spinner for consultants in both hospitals in private practice. Meanwhile, the cost of the project has gone up from €150 million when announced, to €300 million when the Mulvey deal was reached, but now will probably cost considerably more again.

Holles Street might a prime piece of Dublin real estate and have been mentioned in Ulysses, but it is a dreadful site for a maternity hospital.

A rabbit warren of Victorian corridors and crowded wards, it has long outgrown the needs of the 8,000-plus women whose babies are delivered there each year. When emergencies arise, for example when mothers are bleeding excessively, they have to be brought to the adult hospital in St Vincent’s. Ten to 15 such journeys are made each year.

It took years for the new national maternity hospital project to get off the drawing board. In May 2013, then minister for health James Reilly suddenly announced that the existing one would move to St Vincent’s.

Reilly’s declaration received much publicity, but nothing had been nailed down. He had allocated an “indicative sum” of €150 million. However, there was no indication how Holles Street, with its own board, would join with St Vincent’s, also with its own board; or how either hospital was supposed to merge with the hospital group structure then being created by the government, which was also supposed to have its own board. These things matter among the people who run health in Ireland.

Meanwhile, over at St Vincent’s, changes were afoot. The Sisters of Charity replaced the existing board of the hospital group with a more combative set of directors. At the time, the St Vincent’s board was in conflict with the HSE over consultants’ private work and remuneration for senior executives which the health authority argued breached official pay policy – a particularly sensitive issue at a time of austerity and widespread pay cuts and job losses across the country.

Holles Street originally planned to move to two developer-built blocks at the periphery of the St Vincent’s campus which had passed into the hands of Nama, but this idea did not work out.

The new proposal was to locate the maternity hospital in the middle of the campus, something St Vincent’s was noticeably cool on. If that was to go ahead, it said, governance of Holles Street should be subsumed into that of St Vincent’s and there should be one chief executive to whom clinical directors for both hospitals would report. The existing post of master of the maternity hospital would be “evolved” into a clinical director role.

That was utterly unacceptable to Holles Street, whose doctors were (and are) fiercely protective of their independence. The project stalled. A row over floor to ceiling heights in the new building showed how low relationships had sunk.

Two mediation efforts before Kieran Mulvey appeared on the scene came and went without agreement. A low point was reached in January 2016 on the day then minister for health Leo Varadkar launched the new national maternity hospital strategy.

Negotiators from the two hospitals and the department spent the day in sullen disagreement, unable to resolve their differences in closed-door talks.

Harris drafted in Mulvey, the country’s best-known industrial relations “fixer”, in May 2016. He extracted concessions from all sides and secured agreement for an ingenious deal that envisaged a new company being set up to own the new hospital when it moved to St Vincent’s. Various checks and balances were put in place to protect the interests of the two institutions.

A delighted minister, accompanied by then taoiseach Enda Kenny, announced the deal. The turf war between the NMH and St Vincent’s seemed to be finally over. The development could finally go ahead.

There was a catch, though. The agreement brokered by Mulvey stated the new company set up to run the maternity hospital would be owned by St Vincent’s. What it did not explicitly say was that the ultimate owners were the Sisters of Charity.

Questions about religious ethos had not figured in the talks; control had. Outside hospital politics, however, the world was changing: the issue of church/State relations was hot news. Six months later, the first headlines appeared: the new maternity hospital would be “given” to the nuns.

Within days, more than 100,000 people had signed an online petition against the “gifting” of the maternity hospital to the order. Hundreds demonstrated outside the Department of Health. TDs lined up to condemn the deal.

A former master of the NMH, Dr Peter Boylan, led the charge, taking to the airwaves to call for the separation of church and State. Holles Street, under pressure from St Vincent’s, demanded his resignation from its board.

Boylan is a brother-in-law of Dr Rhona Mahony, the current Holles Street master and public face of the plan to move the maternity hospital to St Vincent’s.

Harris suggested reopening the Mulvey agreement. St Vincent’s threatened to review its involvement in the project. Eventually, an appeal by the Minister for a month’s “period of calm” succeeded in quietening things down.

The legal document to give effect to the Mulvey deal was supposed to be ready within months. Instead, it took 18 months to appear. During this time, other issues coloured relationships.

A move to get the health watchdog, the Health Information and Quality Authority (Hiqa), to investigate the death of a patient, Malak Thawley, at Holles Street led to Holles Street challenging Harris in the High Court, and winning.

As this row went on, Department of Health officials stopped attending planning meetings for the new hospital.

Fears now exist that rows over governance and control of the new hospital, along with growing costs and lengthening delays, could ultimately lead the Government to back away from the development, particularly since it is but one of a number of health capital projects in difficulty at the moment.

Last May, Harris wrote privately to Paschal Donohoe, the Minister for Public Expenditure, to argue that the Government’s 10-year capital plan for health was “not balanced” and that the HSE was facing “a funding gap” of €109 million this year.

Harris argued that the new National Children’s Hospital, the new National Forensic Mental Health Campus at Portrane in north Dublin and the relocation of the National Maternity Hospital to St Vincent’s would consume most of the capital budget available over the next three years. So money is clearly an issue.

The sale of Holles Street would bring in €50 million to €100 million to offset against the cost of the project, but the continuing rows and delays have raised fears it may end up being put on the back burner.

The rising cost of the Government’s flagship project, the new National Children’s Hospital at St James’s means there is little money left over for other things. Some close to the NMH project fear a lack of cash may be the real reason underlying the latest hitch.

Mahony’s term as Holles Street master ends on New Year’s Eve – the same day as the deadline for construction to start. Understandably, she wants it across the line by then. Everyone says they want the same. But they are not there yet. It will be a long few weeks.