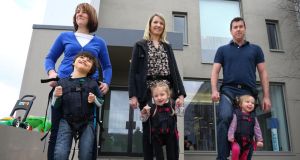 It was fun and games in and outside the Leckey factory in Lisburn, Co Antrim, yesterday morning as beaming young children with cerebral palsy “road-tested” with their parents the Firefly Upsee, a new device designed to enable children with motor impairment to gain the experience of walking.

The company couldn’t have had a better advertiser than 40-year-old Julie Taylor from Manchester, who has been trialling the upsee for the past number of months for her two-year-old daughter Charlotte, who has cerebral palsy.

Charlotte was hooked up to her dad Cameron while her lively and able-bodied twin brother Daniel played alongside. “Charlotte loves being in it,” said Julie. “It’s been great to have her up on her feet. We have noticed a huge difference in the way she lifts her leg. She can now initiate stepping. She tells us which way she wants to go. She goes and explores things which she has never been able to do before.”

And then the tears came. “It’s just great to see her and Daniel walk down the road holding hands which they were never able to do before,” she said. “After all when you are expecting twins that’s what you expect them to do.”


Simultaneous steps
The device was formally launched yesterday by the chief executive of the design and manufacturing company, James Leckey and Debby Elnatan, the Israeli inventor of the device. The upsee includes a harness for the child. This attaches to the system’s adult belt and specially engineered sandals which allows the parent and child to step simultaneously, leaving their hands free for play and other tasks.

It was evident from the cheerful expressions of the children that this very portable device costing £299 has the potential to be a global success for the Leckey company, which employs 150 people making a wide variety of special needs equipment for children.

Debby Elnatan explained that she started working on her invention 17 years ago when her son Rotem, who has cerebral palsy, was two years of age. “At the time his therapist looked at me and said, ‘Your son does not know what his legs are; he has no consciousness of his legs’. That was a terrible thing to hear. I started crying for a week or two and then started finding ways to walk him.”

It was this that spurred her to come up with a design which since then has been modified by the Leckey company after she and James Leckey teamed up together.

She said it depends on the weight and height of the child but the upsee can be used up to the age of about seven.


Worldwide market
James Leckey believes there could be worldwide market for the upsee. “This could go huge and really it should because this product is quite amazing in what it can do for kids with special needs. I have been doing this for 30 years now and I have never seen a product quite like it; it is quite phenomenal,” he said.

Certainly there was no shortage of endorsements yesterday from the parents and the children. Louise Watson from Bangor, Co Down, said it had transformed life for her three-year-old daughter Bethany. “We can go out as a family. We go to the park, we go out in the garden, we play with the ball; she loves it, she has come on so well with it,” she said.

Claire Smyth from Newtownards, Co Down, has been trialling the upsee with her 5-year-old cerebral palsy son Daniel for the past year. “It has given us so many options as a family. Just to have him outside in the street at the same level as other children, kicking a football, going for walks, doing normal family things rather than being in his wheelchair all day, it has been just amazing,” she said.

Clare Canale, an occupational therapist with Leckey from Larne, Co Antrim, said that in addition to the fun, family participation and therapeutic benefits of the upsee it also helped children “develop trunk strength, joint stability, bone density and also improved their respiratory and circulatory systems . . . As much as I am excited as a therapist the biggest impact is with families, the delight on their faces when they see their little ones getting up and about, and the children being able to play with their brothers and sisters, it just reduces the impact of their disability.”