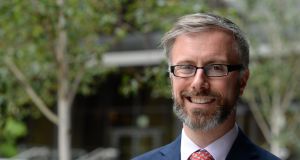 Plans for the review, which is expected to be completed at the end of 2021, will be brought to Cabinet by Minister for Children Roderic O’Gorman on Monday. Photograph: Dara Mac Dónaill

The Government is to initiate a wide-ranging review of the “fragmented” childcare sector that will pave the way for the introduction of a new childcare agency.

Plans for the review will be brought to Cabinet on Monday by Minister for Children Roderic O’Gorman.

Under the plan, an inter-departmental group will be set up to examine the current model of oversight of the sector, which advocacy groups have said is beset with red tape on funding, planning, inspection and other regulatory issues.

At the moment, oversight, governance and other functions are spread across dozens of different bodies, ranging from 30 city and county childcare committees to national bodies such as Pobal.

The memo is seen as the first step by the Government in an effort to streamline and improve what a source described as the “fragmented” model of childcare supervision and regulation.

Ultimately, the Programme for Government aims to introduce a single agency to oversee early years education, Childcare Ireland. The review, which will be completed by the end of 2021, was first recommended in November 2018, as part of the First 5 strategy for early childhood care and education.

The review will focus on reform of the overarching structure for the sector, rather than seeking to tackle the cost of childcare directly. The issue of costs is currently being examined by an independently chaired expert group, which was appointed by former minister for children Katherine Zappone last year. The group aims to produce a report next year.

Childcare costs in Ireland are among the highest in the OECD, despite the low pay in the sector.

The childcare sector has been severely impacted by the Covid-19 crisis, which has compounded issues such as staff retention and access to care for parents and families. The previous Fine Gael-led minority government approved tens of millions of euros in bailout funds at the height of lockdown measures, including temporarily paying almost all wages in the sector, in an effort to ensure the survival of childcare operators, and ultimately facilitate a wider return to work in the economy.

The move comes after the Government warned childcare providers over the weekend not to increase fees as a result of the Covid-19 crisis.

In a statement released on Saturday, Mr O’Gorman confirmed that concessions had been secured for the childcare sector from reforms introduced to the State’s Employment Wage Subsidy Scheme (EWSS).

While other firms will have to show their turnover has reduced by at least 30 per cent in order to access the scheme, this will not be the case for childcare settings, he said. The effect of the exemption will bring total Government funding for the sector to just under €300 million between August 24th and the end of this year.

“This €300 million package to the end of the year also prevents parents from having to pay higher fees to cover extra Covid-related costs,” he said.

Mr O’Gorman said that over 85 per cent of childcare services that are normally open during the summer are currently operating.