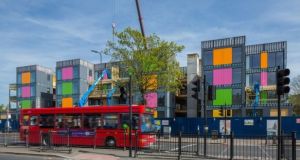 Four-storey modular apartments in Lewisham, London. Dublin City Council has plans to construct ‘close to 1,000 rapid-build apartments’ for social housing at different locations throughout the city.

Builders have been given less than a month to tender for a contract worth up to almost €1 billion to construct factory-built apartments to help resolve the homelessness crisis.

Despite asking contractors to bid for the contract, Dublin City Council says it probably will not spend “anywhere near that” because of a shortage of land for the properties.

Developers have until noon on October 1st to express an interest in two “lots” – smaller housing developments valued at less than €15 million, and larger projects costing more than €15 million.

Up to eight successful bidders will be asked to sign up to what the council is calling a “framework agreement” to design and build “volumetric” apartments.

The apartments are built as pods or modular units in factories, complete with interior finishes and fit-outs, and then stacked together on site. There will be a mix of one-, two- and three-bedroom homes for families on social housing waiting lists.

The overall estimated value of the contract is €950 million. However, Brendan Kenny, deputy chief executive of Dublin City Council, told The Irish Times it is unlikely it will spend anything more than a fraction of the total.

“It is a very rough estimate of what might be possible and it is just to make sure we don’t have to set up a framework again.”

Mr Kenny said the Government has made it clear “there is no shortage of money”.

“The problem is that it takes a long time to build and land is limited. We have to go through a horrendous process of procurement like this one to get ready, but money is not the issue.”

The council has plans to construct “close to 1,000 rapid-build apartments” for social housing at different locations throughout the city, which are expected to cost around €200,000 a unit.

Most sites are “relatively small and will be tendered in bundles of three or four sites” under the framework, which will also be available to other local authorities nationwide.

Once a contractor is on site, the schemes “should be completed in about six to eight months”, a council spokeswoman said.

Modular housing has been used widely in the UK, Europe, Asia and the US, but pilot schemes in Ireland have been dogged by delays.

Documents show the contract will be for one year but “with possible annual extensions . . . up to a maximum of four years, subject to satisfactory annual performance and review, budgetary constraints and government policy.”

The tender is proceeding despite an admission by Dublin City Council’s chief executive Owen Keegan that “there is something seriously wrong” in the delivery of rapid-build modular housing.

Pilot projects on Bunratty Road in Coolock and another five-unit city centre development on Fishamble Street, originally announced in November 2016, were delayed by nearly two years.

The latest official figures on homelessness, released by the Department of Housing last week, show the number of homeless children has more than doubled in some parts of the State in the past year.