Most valuable compounds can be synthesised in laboratories 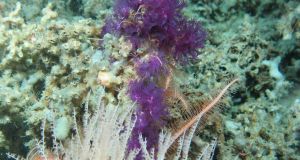 The purple octocoral Clavularia overgrown and the reef forming stony coral Solenosmilia. In the foreground is a delicate bamboo coral with pale pink polyps. The bristly arms belong to an orange brisingid star fish. Photograph: NUIG

Deep water sponges and octocorals found on the edge of Ireland’s Continental Shelf have been sampled by NUI Galway scientists as part of research into possible new treatments for cancer and several other illnesses.

A particularly sponge-rich area, some 100 km west of Belmullet, Co Mayo, was explored during a recent expedition supported by the Marine Institute and Science Foundation Ireland.

Chemicals extracted from the deep sea fauna are being sent for testing their possible usefulness in treating Huntington’s disease, Parkinson’s disease, epilepsy, and various pathogens.

The team of scientists on board the Marine Institute’s RV Celtic Explorer research vessel used the remotely operated vehicle Holland 1 to map and collect samples of sponges and octocorals - the latter so-called as they lack the stony skeleton of tropical reef-building corals.

NUIG sea sponge expert Prof Louise Allcock, who was chief scientist on the two-week expedition, says the bateria within the sponges and octocorals is particularly valuable.

The organisms produce chemicals as part of their defensive systems - to stop, for example, other sponges and corals growing on top of them.

Such chemicals, with their unique structures, could be the source of new drugs, she explained.

The compounds extracted by chemists are being tested against a range of disease screens in NUIG, University of South Florida and with collaborators from around the world.

Prof Allcock expects it could take up to a year for results, with the most useful chemicals likely to be synthesised in laboratories for new treatments.

Prof Allcock’s team was joined by Dr Joana Xavier, who has expertise in sponge taxonomy or identification and is scientific manager of an EU Horizon 2020 project on deep sea sponges in the north Atlantic.

“The diversity of sponges, and particularly of glass sponges, whose tissues have a skeleton made of silica, in Irish deep-sea waters is absolutely incredible,”Dr Xavier said. Some unusually large individuals could be 100 years old.

“New diseases emerge every decade, and it’s really important to also conserve these unique habitats so that medicine can draw on them in the future. Our species distribution maps will help with that,” Prof Allcock said.

Prof Allcock has had a busy summer, having recently participated in an expedition with Irish and British scientists on board the Irish Lights ship Granuaile (italcis) which mapped newly discovered deep-water coral and an entire reef of sponges, off the Irish west coast.

Several firsts in Irish waters recorded by that team included a type of black coral and a species of octocoral of the genus Corallium, comprising large fans with a fragile “porcelain-like” skeleton.