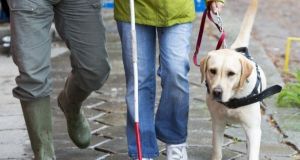 The National Council for the Blind in Ireland said their ‘services throughout 2020 have been in high demand and we’ve responded accordingly’. File photograph: Getty

The national charity supporting the blind has said it is “genuinely concerned” over its ability to continue to run services, due to an expected drop in income during the six-week lockdown.

The National Council for the Blind of Ireland (NCBI) runs 114 charity shops across the country, to fund services for people who are blind or visually impared.

The organisation said the closure of its shops under the nationwide lockdown from Wednesday will result in a loss of over €1 million.

The charity provides rehabilitation and training, as well as counselling and employment support to those affected by vision loss, assisting about 8,000 people a year.

In a statement on Tuesday, the organisation said it is “genuinely concerned about its ability to continue to fund its frontline services due to the Level 5 restrictions being imposed, resulting in the temporary closure of its 114 shops nationwide.”

Chris White, NCBI chief executive, said the organisation “fully understand” the restrictions are necessary to protect public health. “But the consequences will result in considerable strain on funding for services provided by NCBI,” he said.

“Our services throughout 2020 have been in high demand and we’ve responded accordingly, to ensure people who are blind or vision impaired are supported and stay connected,” he said.

“Covid-19 has affected everyone’s lives but it has also robbed people of their sense of touch, which is vital for people who are blind or vision impaired and has led to increased feelings of isolation and vulnerability,” he said.

While the Health Service Executive funds the majority of its services, the organisation also has to fundraise €3 million each year.

During the first national lockdown the organisation made a number of temporary layoffs and salary cuts to staff in April, due to similar financial difficulties.

The NCBI runs a rehabilitation and training centre on Whitworth Road, Drumcondra, north Dublin, and two centres for social activities in Drumcondra and Co Wexford.