Navy vessel LÉ Niamh damaged by onboard fire in Cork 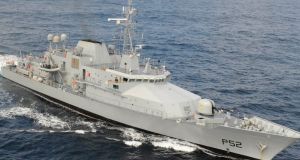 LÉ Niamh: No-one was injured in the onboard blaze, which broke out in a storage compartment aboard the vessel at about 12.15pm today at the Cork Dockyard at Ringacollig, Cobh, while moored for routine maintenance work. File photograph: Military.ie

Naval Service engineers hope to carry out an examination today or on Sunday to try to establish the cause of a blaze which damaged the LÉ Niamh while it was moored in Cork Harbour.

No-one was injured in the blaze, which broke out in a storage compartment aboard the vessel at about 12.15pm today at the Cork Dockyard at Ringacollig, Cobh, while moored for routine maintenance work.

According to the Defence Forces Press Office, the ship’s duty watch raised the alarm and carried out “first-aid fire fighting” to contain the blaze before they were joined by the Cobh Unit of Cork County Fire Service.

Naval Service engineers will carry out an examination of the vessel when it is safe to do so to assess the extent of the damage and establish the cause, the Defence Forces Press Office said.

“While a full investigation into the cause of the fire will be conducted, it is thought to have started in a stores compartment adjacent to where cutting work was being carried out by engineers,” it added.

The 78-metre LÉ Niamh is one of the older ships in the Irish Naval Service. It was built by Appledore Shipbuilders of Devon and commissioned into service in 2001 as an offshore patrol vessel.

In 2002, it undertook one of the most ambitious deployments ever undertaken by an Irish Naval Service vessel when it resupplied Irish troops serving on UN peacekeeping duties in Ethiopia and Eritrea.

In 2008, LÉ Niamh played an important role in the seizure of €400 million of cocaine when Naval Service personnel boarded and detained the yacht, Dances with Waves, off the Cork coast, in a joint operation with gardaí and Customs officials.