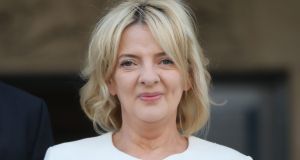 Sinn Féin presidential candidate Liadh Ní Riada has pledged to hold legislators to account and remind them of their duty of care to the Irish people if she elected next month.

Ms Ní Riada launched the Munster leg of her presidential campaign in the Rochestown Park Hotel in Cork city on Thursday, telling the party faithful that she will not be afraid to use the role to be a guardian of the Constitution to remind legislators of the need for equality and inclusivity.

“We need a president that will remind legislators to do their job, that they have a duty of care to the Irish people - that no one can be left behind,” said Ms Ni Riada, who did not take any questions from the media.

“I will use the opportunities of the office, including the ability to address the Oireachtas, to remind legislators of the values that matter - sharing prosperity, caring for all citizens and showing solidarity with others.”

She cited rising rents and homelessness figures, struggling families and people waiting on chairs in hospital emergency departments as issues she was concerned about.

Ms Ní Riada said she would also honour the contribution of carers and those working in the public service while she would also start a presidential initiative to recognise employers paying fair wages.

Saying how honoured she was to following in the footsteps of the late Martin McGuinness, who ran for Sinn Féin in the 2011 presidential election, Ms Ní Riada said the focus would now shift to the issue of Irish unity after the electorate had voted to change laws on abortion and same-sex marriage.

“The next great debate will be about Irish Unity and we need to start that conversation andthat would be the centrepiece of my presidency. The island of Ireland today is in transition. Brexit will have a major impact on the political and constitutional future of this island,” she said.

“Increasingly the prospect, shape and nature of a United Ireland will be a feature of public discussion and political decision making ...... Partition too will be overcome. The tide of history is with those seeking to build a new, progressive and inclusive future.”