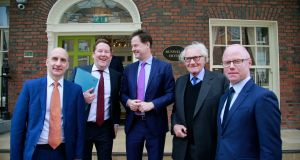 Sinn Féin MPs should not take their seats in Westminster to stop Brexit because it would be “incredibly difficult” for others in parliament be on the same side as them, two former British deputy prime ministers have said.

Many MPs opposed to Brexit would baulk at voting alongside Sinn Féin, they said.

The three, who support Britain remaining in the EU, were hosted by Fianna Fáil and met party leader Micheál Martin as well as Tánaiste and Minister for Foreign Affairs Simon Coveney. They also appeared at a press conference with Fianna Fáil foreign affairs spokesman Darragh O’Brien.

A vast majority of politicians in Ireland have said the six Sinn Féin Northern Ireland MPs should take their Westminster seats to try stop Brexit - or at least influence the UK towards a softer withdrawal. Sinn Féin have repeatedly rejected such a prospect, as figures such as Mr Martin accused them of abdicating their responsibilities.

Sir Nick said: “Anyone who thinks you just add six votes to a growing bloc of anti-Brexiteer MPs probably understates that it would probably lose as many people as you’d gain.

“It would incredibly difficult for any Conservative MP - but I defer to Michael on this - to vote in the same lobbies as Sinn Féin MPs. So it is not something that we would recommend.”

While saying he is interested on the debate on the issue in Ireland, Sir Nick said the policy of abstentionism is something for Sinn Féin to decide.

“Whether the six Sinn Féin MPs should take up their seats in the House of Commons to vote on these important issues, that it is obviously for them to decide, and we don’t want to intrude on political debates here in Dublin, but it would be something that would no doubt create quite a ferocious reaction amongst other people, other parties in parliament.”

Lord Heseltine agreed, saying: “The one thing I have learned about politics is don’t interfere in domestic conflicts and controversies of other countries, but I am absolutely clear that Sinn Féin’s arrival in Westminster would stoke memories which would not be helpful.”

Lord Adonis said it was for Sinn Féin to decide but noted that ending abstentionism “may well” be counterproductive.

The three men said they have not yet heard how a hard Border can be avoided on the island of Ireland, other than the UK remaining the EU single market and customs union.

Lord Heseltine said a so-called “soft Border” solution using technology would eventually lead to a hard Border. He said issues such as smuggling or security concerns would inevitably lead to greater infrastructure, including a border guarded by soldiers.

Lord Adonis said the UK might well decide to stay within the EU if another referendum takes place on the final withdrawal deal.

1 Storm Dennis washes abandoned ‘ghost ship’ onto rocks off Co Cork
2 Caroline Flack death: Public disquiet over media conduct grows
3 Storm Dennis: Thousands without power as wind warning issued
4 Life as a female TD: ‘If I had a euro for every time I’ve been called the C word’
5 Minister accuses Sinn Féin of ‘giving up’ on forming government
Real news has value SUBSCRIBE