Bus strike: Taoiseach calls on both sides to go back to WRC

Companies given ‘absolutely no notice’ of picketing, which NBRU says it did not sanction

Speaking on RTÉ's 'Morning Ireland', Barry Kenny of Irish Rail says they were given no warning of a strike that has impacted Dart, Dublin Bus and Irish Rail services. Audio: RTÉ 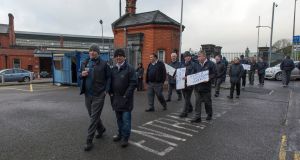 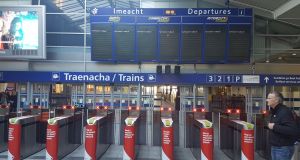 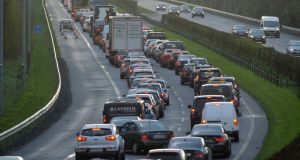 Traffic on the M3 backed up due to secondary picketing during an unoffiicial strike by transport workers as part of the Bus Eireann strike. Photograph: Alan Betson / The Irish Times 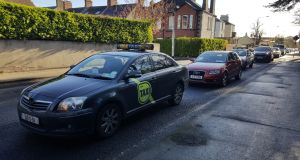 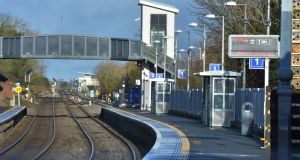 No Trains at Clonsilla station due to secondary picketing by transport workers as part of the Bus Eireann strike. Photograph: Alan Betson / The Irish Times 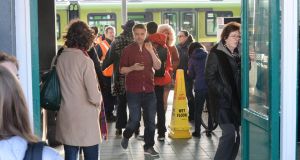 Commuters in Bray this morning where there was no Dart Service to the city. Photograph: Cyril Byrne/The Irish Times

Taoiseach Enda Kenny called on both sides in the Bus Éireann dispute to go back to the Workplace Relations Commission after widespread strike action caused severe disruption for commuters.

Mr Kenny made his comments as Minister for Transport Shane Ross said Friday’s wildcat action by bus workers made him more determined not to intervene in the dispute.

Irish Rail, Dublin Bus and Dart services have resumed after pickets by striking Bus Éireann staff were lifted at stations across the State.

Almost all Dart, Dublin Bus and Irish Rail services were cancelled on Friday morning due to the picketing, which comes a week into a strike by 2,600 Bus Éireann staff over company plans to introduce new cost-saving measures without agreement in an effort to improve the company’s finances.

Irish Rail said “we will resume services ASAP but there will be a knock-on impact until at least lunchtime”.

Dublin Bus said “secondary picketing at our depots has now been lifted and buses are beginning to depart”.

In a statement, the National Bus and Railworkers ’ Union (NBRU) said the “unofficial action being undertaken today at Dublin Bus and Iarnrod Éireann Garages/ Stations, does not have the official sanction of the NBRU.

“All workers at both companies that are members of the NBRU should be at work as normal today.”

It is not clear if public transport services will operate as normal during rush hour on Friday evening. However, traffic is expected to be heavier than normal because of the increased number of people who drove into work this morning.

Barry Kenny of Irish Rail told RTÉ’s Morning Ireland that the company did not receive any advance notice of the extension of the Bus Éireann dispute.

“The first we knew about it was when Bus Éireann pickets showed up just after 4am,” he said. “It was designed clearly for maximum effect. Friday is the busiest day of the week for intercity services.”

A Dublin Bus spokeswoman also confirmed that the first they knew of the secondary pickets was when they arrived at the seven Dublin Bus depots “with absolutely no notice”.

“We’re not involved in the Bus Éireann dispute. For the past seven days services went on as normal. There was no indication that this would happen.”

NBRU general secretary Dermot O’Leary said the first he heard of the secondary picketing was when he began receiving phone calls early this morning.

He said he was trying to establish who is involved in the secondary picketing and that to the best of his knowledge, no union was involved.

Bus Éireann said the “escalation of this action in an illegal manner will not resolve the matter, and as a company, we can only engage on the basis of good faith”.

“Trust must be restored in order for dialogue between both parties to resume.

“It is critical - for both the solvency of the business and to secure a viable future - that these changes are implemented.”

Mr Ross called the stoppages an “unofficial and unjustified protest”.

In a statement, Mr Ross said: “I understand that the travelling public are, rightly, very angry at having to deal with this sudden, unannounced disruption to their Friday morning and I hugely sympathise with their unforeseen predicament.

“Passengers in companies that are not involved in the Bus Éireann dispute are being seriously discommoded this morning by a spillover of unofficial protest.

“This is not part of the fair conduct of strikes.”

Sinn Féin leader Gerry Adams called on the Taoiseach to demand that Mr Ross intervenes in the crisis, saying:

“The sad reality is that his boss, Taoiseach Enda Kenny, is allowing Minister Shane Ross to sit on his hands as the chaos Bus Éireann continues,” he said.

“The crisis at Bus Éireann, and right across our public transport network, has been caused by bad policy and now by the inaction of Minister who has a very clear privatisation agenda.”

People Before Profit TD Bríd Smith said the work stoppages are “a signal that workers will no longer accept attacks on their living standards”.

On Thursday, Mr O’Leary said it was “becoming increasingly clear that the continuous build-up of frustration and pressure among our members is reaching volcanic proportions and may, despite our urgings to the contrary, erupt into the mother of all public transport disputes”.

National Transport Authority fines for a lack of services are expected to be about €125,000 for each weekday and €75,000 for Saturdays and Sundays.

Bus Éireann has said it is “prepared to re-enter time limited talks in relation to efficiencies and work practice changes”.

“The company is heading towards insolvency, and without these, we cannot achieve a viable and sustainable future,” it said.

1 Prepare for six months of Covid-19 restraints, warn health officials
2 Speed and distance of Covid-19 droplets tracked by Mater researchers
3 Covid-19: Seventy cases in Cork traced to local pubs and restaurants in recent weeks
4 No joy for consumer with a faulty Husqvana chainsaw
5 The Secret Teacher: My students’ capacity to socially distance is worryingly low
Real news has value SUBSCRIBE