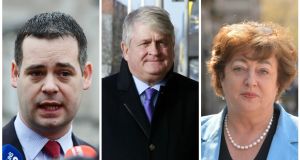 Denis O’Brien (centre) says he will consider an appeal against ruling on comments made in Dáil by Pearse Doherty (left) and Catherine Murphy (right). Photographs: Alan Betson and Collins Courts

Businessman Denis O’Brien has said he is disappointed by the High Court’s ruling in the case he took against the Dáil over comments made by two TDs about his banking affairs but encouraged by some sections of the judgment.

Ms Justice Úna Ní Raifeartaigh dismissed his action against the clerk of the Dáil and the State after upholding the respondents’ core argument: that the Constitution prohibits the courts intervening over “utterances” in either house of the Oireachtas.

Mr O’Brien said he was encouraged by the fact that Ms Justice Ní Raifeartaigh “appeared to appreciate” that the current operation of parliamentary privilege warranted a review. He said he would study the judgment before deciding if he should appeal against it.

Mr O’Brien sought the court’s censure of the disclosure in the Dáil of details of his private banking arrangements that were at the time the subject of an injunction prohibiting disclosure by RTÉ.

He was also seeking criticism of how the Committee on Procedure and Privileges dealt with the matter. The committee found that there had been no abuse of Dáil privilege.

In a statement, Mr O’Brien quoted from a section of the judgment which said the tension between freedom of speech in the Dáil and the role of the courts reached “an extremely acute point” when a member of the Oireachtas released confidential information which was the subject of an injunction.

Mr O’Brien also quoted the judge who said that, in her view, the disclosures in the Dáil damaged Mr O’Brien and that “the release of the information appears to have been done in a deliberate and considered manner by the deputies in question”.

Mr O’Brien said he would “like to record my appreciation for the courteous hearing I was afforded by the court and the careful judgment” that was made.

“This is in marked contrast to the treatment I received from the Dáil and its committee,” he said.

Social Democrats TD Catherine Murphy, who was one of the deputies who made the statements in the Dáil, said she was not surprised by the judgment which she said separated courts from parliament and guaranteed free speech in the Dáil. She told RTÉ it was “useful” that Ms Justice Ní Raifeartaigh had gone into such detail.

The other deputy involved, Sinn Féin’s Pearse Doherty, welcomed the ruling which he said “vindicated” himself and Ms Murphy and “makes it clear that our comments, made under Dáil privilege, did not affect the outcome of his case against RTÉ”.