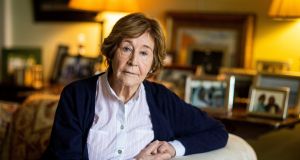 Catherine O’Halloran says she is so worried about her son Richard’s health, who has been unable to leave China since February 2019. Photograph: Tom Honan

The marks, good and bad, left by the State’s history on one family line are traced through the household of Catherine O’Halloran, near the foothills of the Dublin mountains.

Her uncle was the late taoiseach, Garret FitzGerald. Her grandfather, Desmond FitzGerald was the first minister for external affairs in the newly formed Irish Free State in 1922.

Growing up, Mrs O’Halloran, who is a reluctant interviewee with The Irish Times, says she saw impact of her grandfather’s periods in jail before and after the Easter Rising on her own father.

Today, she is dealing with her own troubles since her son, Richard, has been prevented from leaving China since March 2019, after he went there for five days to meet investors in his then-employer’s company.

Urgently appealing to the Irish Government to do more to get the Chinese authorities to free him, she says: “We have to get him back. I just worry about him. I’m so worried about his health.

“I’m terribly disappointed with the Government and the Department of Foreign Affairs, because they’ve done so little for a citizen in another country,” she goes on.

In her home near the foothills of the Dublin mountains, at a dining table which has played host to countless happy Christmas dinners, Mrs O’Halloran takes out notes she prepared earlier.

She is a private person, who would evidently prefer not to have to invite a journalist into her home. “I’m not a public person. And I don’t really do any of this sort of thing. But for my son, I would do anything to get him out,” she says.

“We really want to get Richard home. And we would beg the Department of Foreign Affairs to become a bit more proactive and interested in the health of my son.” She is worried about his mental health as well. “He is very depressed.”

Mr O’Halloran, from Foxrock, travelled to China for what was supposed to be a brief visit in February 2019, to try to sort out the affairs of his employers, the Dublin-based China International Aviation Leasing Service, whose owner was serving a jail sentence. As he attempted to leave, he was issued with an exit ban.

Though he has never been personally accused of any wrongdoing, his former company’s owner, Min Jiedong, went on trial related to a crowd-funding scheme which was accused of illegally collected money from Chinese investors. The money was used to buy an aircraft which is now leased to a European airline. China is demanding the return of the aircraft, something Mr O’Halloran has said he can’t do. He is free to travel anywhere in China, but cannot leave the country, and is effectively a commercial hostage.

Over recent weeks, the family have become increasingly concerned about Mr O’Halloran’s physical and psychological welfare. His mother spoke to him within the last few days. “He sounds so distressed,” she says. She has avoided talking about efforts to get him home, because he is so fragile, she fears it will only make him more despondent. Instead, she has been focusing on talking “about the children and what they’re up to”.

“He is a terrific dad” to his four children, Ben (13), Amber (11), Isabella (9) and Scarlett (7), speaking to them every day over FaceTime until recently, when contact has become more sporadic.

Scarlett had been going to bed at night with a photograph of her father. “I asked her yesterday, ‘What would you like for Christmas?’ And she said, ‘Dad to come home’ . . . We need the Government to realise that four children’s lives cannot be ruined.”

“Minister Coveney spoke to his Chinese counterpart recently about a number of important issues. Trade was not part of their discussion. The case of Mr O’Halloran featured prominently in this discussion which is the latest in a series of engagements with the Chinese authorities, both by the Minister personally and by officials over the past several months,” the spokesperson said.

The spokesperson added that this was “an extremely complicated case” and that “our officials in Dublin, Beijing and Shanghai place the utmost importance on Mr O’Halloran’s welfare. We are continuing to do everything possible to help resolve the case and bring Mr O’Halloran home”.

But Mrs O’Halloran says she has begun to give up hope of that happening, and is increasingly worried for her son’s wellbeing. The Chinese government has been continually “moving the goalposts” in terms of what Mr O’Halloran needs to do in order to be allowed to return home. He has resigned from the company, as requested, but is not in a position to have the aircraft returned to the Chinese, as it is currently leased to a European airline.

She was horrified to learn recently that he had suffered two recent physical collapses. “The housekeeper found him collapsed on the floor. The hospital told him that he actually was dead at one stage. They brought him back because he wasn’t able to breathe.” He has a hereditary lung condition which was diagnosed at the age of 18. Previous surgeries mean his lungs are held together with staples, and he also has asthma. He is, his mother says, extremely vulnerable to coronavirus and other infections.

In the last two weeks, he moved from an apartment he had been living in back to a hotel where, his family hopes, he won’t be left alone if he becomes ill again.

In a room surrounded by photographs of Mr O’Halloran and her other children, Catherine O’Halloran makes plans for the family’s second Christmas without him. They will make contact over FaceTime, but not when they’re all together, in case that exacerbates his loneliness and distress. Recently, he tried to record a birthday wish for his sister, and it took him 10 attempts to do it, because he was so emotional. “He’s kind of lost hope,” she adds. “We need to get him out of there as quickly as possible . . . Our feeling is he is not going to be the same person when he comes home . . . It’s so sad not having Richard here with us.”

Proud of her family’s lineage, she says: “The current Government has really not done what I would have expected them to do, seeing as my grandfather gave up a lot of his life for the State. He was in prison for three years due to his part in the Rising.”

Visibly distressed, she says that her own grandchildren are suffering because of enforced separation from their father. Her uncle, Garret, she says finally, “would have moved heaven and earth” to get her son home.