‘We will never get over it’: Christine Ryan says company should face criminal punishment 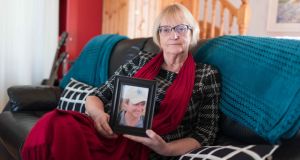 Christine Ryan with a photograph of her son Michael at home in Lahinch, Co Clare. Photograph Eamon Ward

Airline manufacturer Boeing must suffer criminal punishment for the failures that led to two crashes of its 737 Max aircraft, the Irish mother of one of the victims has said.

On Friday, Mrs Ryan was part of a network of people from all over the world who have lost loved ones that communicate with each other daily, sharing information.

“It was corporate greed. We know that the US Federal Aviation Administration had told Boeing that within the lifetime of those planes, there would be 14 crashes,” she said.

“That came out in a hearing in America. They had been warned but still they didn’t stop,” she says. “I don’t think it will be any consolation but I’d like to see justice done. It’s not a question of money.”

Mrs Ryan said, “They are a multi-million dollar organisation. Money doesn’t matter to them. We would prefer if people were found culpable. They need to be held accountable for killing all of those people.

“Nothing is going to bring them back but if people were held accountable for what is really a criminal offence rather than a civil offence, that might give us some bit of peace” she declared.

Her family, she said, is still struggling to cope with the loss of her son, who had worked all over the world with the United Nations’ World Food Programme, including South Sudan during the Ebola crisis.

“As far as the family is concerned, we’re not doing good. None of us are doing good. We haven’t dealt with this very well. None of us have gone for counselling or anything like that but we probably should,” she said.

“He was so interested in us. I would be in contact with him every day, telling him how everyone in the family was getting on. If I was worried about anyone, I’d tell him. We’d discuss it and he’d try and get them sorted,” she said.

“He is such a huge loss to his wife and his kids. To all of us. It’s so unfair. It shouldn’t have happened. He was a humanitarian, he helped people, he looked out for people,” she said.

Her son was “the heart” of the family, she said. “We will never get over it, I don’t even know will we get through it. People say it will get easier as time goes on. As far as I’m concerned, it’s getting harder. I depended on him so much.

“He had great energy for his life and his work. He helped out so many people, people he didn’t know. They came to him with their problems and he helped them. The worst thing is that he would have done so much more.”