More than 7,000 hospital staff to ballot for strike action 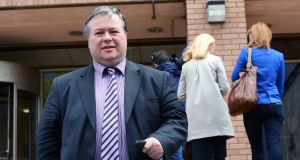 Paul Bell, Siptu health division organiser, said the Government had refused to engage on findings that his union’s members had been ‘underpaid for many years’. Photograph: Eric Luke

More than 7,000 hospital support staff are to ballot next month for strike action as part of disputes over pay.

The staff involved include about 1,000 chefs employed by the HSE as well as healthcare assistants, maternity care assistants, laboratory aides and surgical instrument technicians who are represented by the trade union Siptu.

The latest challenge to the Government over pay comes as the Irish Medical Organisation (IMO) says industrial action by hospital consultants is inevitable if the Government does not enter into talks to end the lower pay rates in place for senior doctors appointed in recent years.

The doctors’ trade union said it was “long past the time for prevarication” and urged the Government to urgently enter into talks on ending the current two-tier pay system, which, it said, had led to unprecedented levels of unfilled specialist posts, record numbers on trolleys and thousands of cancelled procedures.

Earlier this week nurses warned of further strikes if a row over a new contract – a key element in proposals that led to the suspension of a series of work stoppages last month – was not resolved.

Siptu’s support staff sector committee decided on Thursday to ballot members for strike action as part of an ongoing dispute over pay awards granted under a job evaluation process.

Paul Bell, its health division organiser, said the Government had frustrated the job evaluation process, which it had freely entered into as part of a public service agreement in 2015. He said the Government had refused to engage on the findings, which concluded that his union’s members had been “underpaid for many years and going forward should be entitled to migrate to pay scales which recognise their contribution to the provision of essential health services throughout the length and breadth of our country”.

“Pay adjustments due through the upgradings range from 5 per cent to 7 per cent, mainly applying to healthcare assistants, maternity care assistants, laboratory aides and surgical instrument technicians. It is understood that monies are due to these workers since September and October 2018. It is clear from the Public Service Stability Agreement and the terms of the support staff job evaluation procedure that engagement and implementation of any upgrade awarded be applied within eight weeks. Despite the determined efforts of Siptu to engage, the HSE and the Department of Public Expenditure and Reform have sidestepped their obligations.”

Siptu also said that about 1,000 chefs employed in the HSE and related agencies would also be balloted for strike action.

“They had their roles reviewed, which determined that their pay scale was not appropriate to that of a modern skilled craftworker. In a jobs market where it is extremely difficult to both hire and retain chefs, an independent review identified that chefs have no pay relationship with any of the craft groups within the public service and should be permitted to migrate to the existing craft pay scales.”

“This migration, while of a small cost to the health service, is hugely significant for our members and in particular for future pay movement,” Mr Bell said.

He said the continuing two-tier pay system under which consultants recruited after 2012 were paid 30 per cent less than longer-serving colleagues “reflected a deeper anti-senior specialist agenda in Government”.