More than 100 horses have died after eating toxic Sycamore seeds 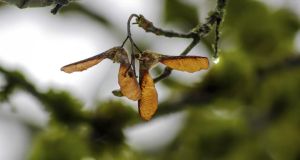 Sycamores had been very bountiful this year. And because the weather was mild, horses were outdoors for much longer than usual and therefore more likely to eat the toxic seeds. Photograph: Bloomberg

At least 100 horses have died in recent weeks from a disease caused by eating the seeds from sycamore trees. The “helicopter” seeds contain a toxin, hypoglycin A, which causes a fatal muscle disease called equine atypical myopathy.

The Irish Equine Centre’s head of pathology, Dr Ursula Fogarty, said the first cases were identified in early October and the outbreak appeared to be caused by a combination of factors.

In common with fruit trees, sycamores had been very bountiful this year. And because the weather was mild, horses were outdoors for much longer than usual and therefore more likely to eat the seeds. She said there had been other years when many horses had died from ingesting the seeds “but we’ve never had anything as bad as this year”.

“It will be a while before all the figures will be collated but it certainly is an extraordinarily high number,” he said. “There are probably quite a lot of cases that are not being reported as such because it can mimic colic.

“In other years we would be getting maybe five to 10 cases a year in the country and perhaps up to 20 in a bad year. This year it’s way out of proportion.”

His practice had seen seven cases, and five of those had been fatal. While some people believed the animals ate the seeds due to a lack of grass, Dr Fogarty said some horses were foragers by nature and would eat the seeds even if they had enough grass to eat. She said it had affected all types of horses, from valuable thoroughbreds to the family pony.

Don Collins, chairman of Veterinary Ireland’s equine interest group said horses had been known to die within 48 to 72 hours of the onset of symptoms but survival rates could be improved by prompt treatment.

The Irish Equine Centre believes the worst may be over for the current outbreak, but said the seeds would always pose a risk.

“The number of new cases fortunately has declined dramatically,” Dr Fogarty said. “I am aware of three new cases last week and one new case this week.”

Mr Collins said owners should remain vigilant for as long as the seeds remained on the ground.