More than 100 cyclists seriously hurt in collisions each year 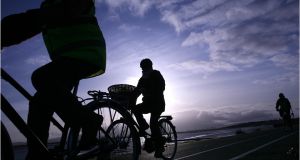 More than 100 cyclists are being seriously injured in collisions each year, new figures show.

Figures released to The Irish Times by the Road Safety Authority (RSA) show a steady rise in the number of serious injuries suffered by cyclists during an eight year period between 2006 and 2014.

The figures have emerged at a time of concern at the high rate of cyclist deaths this year, with ten having been killed in the first six months of the year.

According to the RSA, 106 cyclists were seriously injured in 2014, the most recent year for which figures were available.

There has been a sharp rise in annual figures of cyclist injuries, in part due to a change in how the RSA compiles its statistics, moving from paper to electronic records in 2014.

However, despite this change, cycling groups argue the figures released by the RSA “grossly misrepresent” the true level of injuries

Dr Mike McKillen from advocacy network Cyclist.ie says the figures do not fully reflect the extent of serious injuries being suffered on the roads by cyclists.

“The figures are definitely higher than the ones provided by the RSA. The Garda figures are an under-recording of what is actually happening,” he said.

“The figure provided of 106 serious injuries to cyclists cannot be correct. It would have to be in the thousands.”

He added: “Gardaí do not record all serious injuries happening to cyclists. The problem is that hospitals do not have to send the details of cyclists admitted to emergency departments to gardaí, so there is no way of cross-checking.

“So there is no way of cross-checking between Garda records of a serious injury happening to a cyclist and an actual admission to a hospital bed through an emergency department,” said Dr McKillen.

He said the 10 cyclist deaths so far this year was the same as the number killed in 2016.

A spokesman for Minister for Transport Shane Ross said he was concerned at the recent rise in the number of cyclist fatalities.

The Minister has met Neil Fox (brother of Donna Fox, who was killed last September when a truck collided with her while she was cycling), representatives of Cyclist.ie and Cycling Ireland and RSA chief executive Moyagh Murdock to discuss ways to protect pedestrians and cyclists.

“Serious injuries for people cycling can have life-changing implications and are of huge concern,” said a spokesman for the Minister.

“While the data on serious injuries suggests that the number of serious injuries has increased by over 100 per cent, it should be noted that the reason for the increase in 2014 was due to improvement in the data collection and analysis. It is not due to increased crash risk. Figures for serious injuries for 2015 and 2016 are currently being validated by the RSA,” he added.

He noted it was important to remember that the number of people cycling had increased significantly over the past number of years.