Documents could assist in establishing true details about murder of Jean McConville, they contend 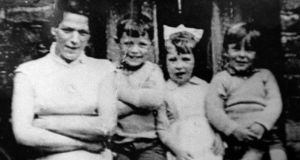 Jean McConville (left) pictured with three of her children shortly before she disappeared in 1972. Photograph: Pacemaker, Belfast

A journalist and former IRA prisoner are to lodge a freedom of information inquiry with the British government in an effort to cast further light on the IRA murder of Jean McConville.

Ed Moloney and Anthony McIntyre have invited members of the McConville family to join them in the freedom of information request to access the war diaries of the British army’s First Gloucestershire Regiment who were operating in west Belfast for periods in 1971, 1972 and 1973.

The diaries, which record daily military events during a regimental tour, cannot be opened until January 2059. They are the only regiment to have served in Divis in west Belfast around that period and whose war diaries have been embargoed in this way, according to journalist Mr Moloney and former IRA prisoner and academic Dr McIntyre.

They have approached the McConville family seeking their support for the request while former Police Ombudsman for Northern Ireland Baroness Nuala O’Loan has told them that in principle she would support the opening of the diaries if they served a useful purpose.

“The First Gloucesters served in the Divis Flats area of west Belfast at the time Jean McConville came under IRA suspicion of working for British military intelligence and was subsequently abducted, murdered and her body hidden in a secret grave,” Moloney and Dr McIntyre said in a statement yesterday.

They said they wanted to access the diaries to see if they contained any information which might indicate what happened to Ms McConville, the widowed mother of 10 who was abducted from her apartment in the Divis Flats, shot and buried in a Co Louth beach.

The McConville family has always insisted that their mother was not carrying out such work and that she was killed by the IRA because she had comforted a British soldier who had been wounded outside her door.

Baroness O’Loan in her 2006 investigation found that Ms McConville was not acting in any informer capacity for the British army. She questioned what value the diaries might be as the First Gloucesters were not actually in west Belfast when Ms McConville was abducted sometime in late November/early December 1972. They served from December 1971 to April 1972 and from April 1973 to August 1973, she said.

Nonetheless, Baroness O’Loan added that if it could assist the murder investigation such documents should be handed over to the PSNI while, with possible redactions because of threat to life considerations, they could also be made available to Mr Moloney and Mr McIntyre. “Anybody who has any information about what is a murder investigation should hand that information over,” she said.