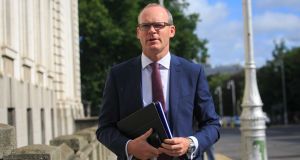 Former minister for defence Simon Coveney has defended the decision of his successor Paul Kehoe to hold a medal award ceremony for members of the Naval Service involved in rescuing over 11,500 refugees in the Mediterranean at Rosslare, rather than at Naval Service HQ in Co Cork.

Mr Coveney said that it was important to remind people that the Naval Service was a national service, even though it was headquartered at Haulbowline in Cork Harbour.

Mr Coveney agreed that it would be easier for Mr Kehoe to travel to Haulbowline, rather than bring over 50 Naval Service personnel and their families to Rosslare, but it was important that the Naval Service ceremonies were brought around the country to make people aware of the service.

“One of the things I tried to do when I was minister for defence was bring the Defence Forces to the people and that’s why it’s important that people see Naval vessels in other ports outside of Cork so that we have people from Wexford and other parts of the country who want to join the service.

“This is a national service and we want to attract the best people from across the country into the Defence Forces whether it’s the army, the navy or the air corps and it’s important that we hold ceremonies of national significance in other parts of the country to attract people in.”

Earlier, PDFORRA, the representative body for members of the Defence Forces, had criticised the decision by the Minister of State with responsibility for the Defence Forces, Paul Kehoe to hold the medal ceremony in Rosslare in his own Wexford constituency.

PDFORRA’s Mark Keane told Cork’s RedFM that they believed the awarding of the new Defence Forces International Operational Service Medal should take place in Haulbowline to facilitate those receiving the medals and their families who live close to the Cork Harbour base.

Meanwhile, Cork Fine Gael Senator Jerry Buttimer also backed the call to hold the ceremony in Cork, saying the Government should be seeking to make it as accessible as possible for both Naval Service personnel and their families who had made huge sacrifices when their loved ones were abroad.

Senator Buttimer confirmed he had raised the issue with Mr Kehoe who wrote back to him to inform him that there would be a number of medal ceremonies and that Haulbowline would be among the venues for such medal ceremonies which recognise the fine work done in the Mediterranean.

Mr Kehoe said the deployment of Irish Naval vessels which began in May 2015 with the LE Eithne to be followed by the LE Niamh, LE Samuel Beckett, LE Roisin and LE James Joyce, was an important element in Ireland’s response to the migration crisis in the Mediterranean.

“It highlights the Government’s commitment to assist with efforts to prevent further tragedy and loss of life at sea. The rescue of over 11,500 migrants, to date, by Irish Naval Service vessels demonstrates clearly the value of Ireland’s participation in this important humanitarian response.”

“All of this is happening so as to demonstrate that the Defence Forces belong to and serve everyone in Ireland. By holding ceremonial events in various locations the excellent and valued work of all those who serve in the Defence Forces can be brought to the attention of the wider community.”