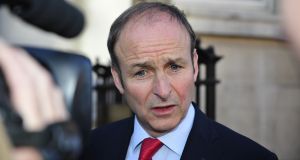 Fianna Fáil leader Micheál Martin has told a party meeting that the public may need to be told when the restrictions introduced to deal with the coronavirus crisis will be lifted. Photograph: Aidan Crawley

Fianna Fáil leader Micheál Martin has told a party meeting that the public may need to be told when the restrictions introduced to deal with the coronavirus crisis will be lifted.

Mr Martin made the comments during a conference call with his senators and MEPs on Wednesday morning, which discussed the Covid-19 crisis and government formation.

Senator Pat Casey told the meeting that the public needed to be given hope about when restrictions will be lifted, alongside the warnings given recently and the extra powers of enforcement given to An Garda Síochána.

Mr Casey told the call: “We need to just give people hope that this is going to be lifted. Nobody knows when it is going to lifted but we do need to give them hope.”

Mr Martin replied that he will be raising that very point a meeting of all party leaders on the State response to coronoavirus tomorrow.

The Fianna Fáil leader told the conference call: “I’ll be making that point tomorrow at the leaders’ meeting.

“There is that view that Pat has just articulated that there will be a need, in tandem with saying the restrictions are not being lifted, that there’d be some end point, that there would be some sort of date or some target date by which we could indicate to people that you can see an easing of this, you know?”