Quarantine in Hong Kong: Do wristbands and phone tracking work? 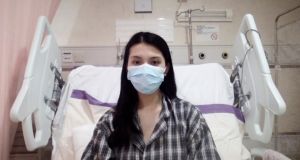 Simran Lalwani in a low-risk ward in a Hong Kong hospital after testing positive for coronavirus. Photograph: Christina Simons for The New York Times

The images looked benign: a hand dangling chopsticks over a bowl of soup, a young man giving a thumbs up, a woman reclining in a bed at Ikea.

But they drew outrage in Hong Kong in recent weeks because they seemingly showed people violating a mandatory quarantine. In two of the images, flimsy blue tracking wristbands, issued by the authorities to force those under isolation orders to stay inside, were visible; in the third, the woman was said to have cut hers off.

Across the world, local leaders are taking wildly different approaches to sequestering people to thwart the spread of coronavirus, also known as Covid-19.

In Beijing, travellers from abroad must spend 14 days in an isolation facility, at their own expense.

Hong Kong in some ways has gone further than others. With the wristbands, the semi-autonomous Chinese territory is the first place to both track people and place a marker on their bodies. Everyone arriving from foreign countries is required to wear the bands while remaining isolated for two weeks.

A debate has ensued over whether it is a reasonable infringement on personal liberties. “What’s fascinating is that this is forcing us to confront the tension that can exist between freedom and wellbeing and liberty and health,” said Julian Savulescu, a philosopher at the University of Oxford.

Interviews with people required to wear the bracelets revealed views that fluctuated over the two weeks.

But many eventually fixated on the same question: Was this high-tech bracelet actually just a strip of paper?

This is weird. But what’s not right now? When a health official attached the shiny blue bracelet with a QR code to Simran Lalwani’s wrist, it did not strike her as much stranger than anything else lately.

After her in-person classes at the University of Exeter in England were cancelled, she had spent 12 hours on a flight in a hazmat suit, goggles and mask, willing herself not to eat or visit the restroom in order to minimise her risk of being infected by another passenger.

At the airport, two stations – one for bracelet attachment, the other to sign a quarantine contract – reinforced what she already knew. In recent weeks, there had been a spike in coronavirus cases in Hong Kong, primarily involving people returning from abroad.

Those under quarantine could serve out their two weeks anywhere in the city, so long as they wore their wristband and stayed within the perimeter they registered on an accompanying app. “I don’t mind,” 19-year-old Lalwani said over WhatsApp as she settled into her hotel, “if it means that it will keep both myself and everyone else that much safer”.

If she violated the terms, she could be shipped off to a government quarantine facility. She would also risk a fine of around €600, six months in jail and social media retribution. It was the online mob that worried her most. She was familiar with its loose relationship with facts.

The coronavirus villain in the Ikea bed who had “cut off” her wristband, according to posts on social media and several news outlets, was a friend. The young woman, a fellow Hong Konger studying abroad, had actually never been issued a wristband, Lalwani said. An interview with the 19-year-old design student confirmed this; she said she had flown in from New York before the wristband programme applied to arrivals from the US.

Priscilla Song, a medical anthropologist and professor at the University of Hong Kong, said she felt a “wave of relief” after arriving at the Hong Kong airport from St Louis with her husband and two children and being assigned wristbands. “Yes, as an American, it’s pretty unpalatable,” Song said of the tracking system. But ultimately, she added, she saw it as “evidence of a functioning public health system”.

By the second day, however, doubt started to creep in. At the airport, Song and the other arrivals had learned that they would be texted a Pin. Only with the Pin could they register the boundaries of their digital cage. But none had received the Pin.

The longer they spent gazing at this thing on their wrist, the more sceptical they became that it – on its own – did anything. “They are just, like, waterproof strips of paper,” Song said. “I don’t know if they have any digital things embedded in them.”

The same thought struck Lau Paclan, who was quarantined in his parents’ apartment. He said it was strange that there had been so much hype around something so “useless”. The department of health and the Innovation and Technology Bureau have said that the tracking system is a work in progress and that some of the 60,000 bracelets it plans to issue are more advanced than others.

When Song’s Pin finally arrived, the app prompted her to walk the perimeter of her apartment. After about 30 seconds, it decided she was done. From then on, whenever her phone was in an unregistered spot, it emitted a horrible beep. Stopping it required scanning every family member’s wristband QR code.

But what if you just left your phone inside your apartment, within the registered boundaries, and walked outside? Would the authorities ever know you violated quarantine?

Days 3-6: Pretend it is working

At least Song had gotten a Pin.

When Arhan Chhabra (15) who was quarantining with his mother, finally got someone on the help line after days of calls, “They told us to just not worry about the band and self-quarantine anyway,” he said. But he feared that if he took the bracelet off, “it will seem like we are trying to escape,” he said.

Farah Siddiqui, who co-founded a group to support people in quarantine in Hong Kong, said that she had heard of people exploiting the system to evade quarantine but that most had embraced it.

Still, fear may play a role. “The government can lie to us and tell us this is tracking you all the time, and I think if you believed that, you probably wouldn’t go out,” she said.

For the family of 15-year-old Tristan Ng, there was an extra incentive to stay put. Their hotel does not provide quarantined guests with keys. Lock yourself out, and the staff will call the police. “We’re pretty much trapped in a jail cell,” he said.

Day 14: Freedom, but not for everyone

At the exact hour that the quarantine countdown clock was up, Song deleted the app. Her daughters were asleep, so cutting the bracelets – including one they had put on a stuffed bear – would wait until the morning.

Across town, Lalwani received a text saying that her quarantine was up. But this was irrelevant – she was now in a hospital room with four other coronavirus patients.

On day three, she had gotten a call alerting her that the passenger next to her on the plane, a friend who wore a matching hazmat suit, had tested positive. Days later, Lalwani developed a cough.

After she called the number in the app, an ambulance drove her to a coronavirus testing site. Later, she was placed in a low-risk hospital ward, where she would have to stay until two back-to-back tests were negative. “It must have been when we were putting on hazmat suits,” she said. “I must have touched something she touched. It shows how contagious it is.”

So, in the end, Hong Kong’s rigid quarantine system seemed to work. But what had kept Lalwani fully isolated were her own instincts. She could have quarantined in her family home, but the night before she arrived, she booked a hotel room on a whim.

“I just had a hunch that something was going to go wrong,” she said. “And I was right.” – New York Times

From pizzas to smoothies: 10 delicious ways to cook with brussels sprouts
10