Up to €15m to be provided to ferry operators on routes to Wales, France and Spain 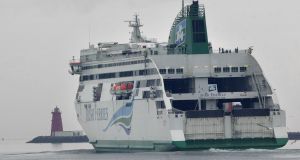 The Government is providing up to €15 million to keep five critical sea routes going during the Covid-19 pandemic.

The routes between Dublin and Cherbourg and Rosslare to Fishguard and Pembroke in Wales, Cherbourg in France and Bilbao in Spain will be operated as a public service obligation (PSO) for the next three months.

The measures are being introduced because Covid-19 is likely to stop all passenger traffic on these routes for the foreseeable future.

Ferry operators would expect Easter to be among the busiest times of the year and it marks the start of the tourist season.

Governments fund PSOs when routes are regarded as critical, but are uneconomical without a subsidy.

The support package will be restricted to the five designated routes and will be targeted at compensating the gap between specified costs and revenues generated on the services.

Transport companies will continue to pay shipping companies for the services on these routes as usual.

Announcing the measures,the Minister for Transport Shane Ross said the Government intervention is necessary for the economic viability of the routes in the short term.

He added: “Because of this, it has become clear that urgent measures are necessary to assist in the continuation of roll-on roll-off freight transport on these services over the next few months.

“The five routes in question are of strategic importance to Ireland because they ensure the robustness and resilience of Ireland’s lifeline supply chain which is critically important at this time for the movement of goods, including food and medical supplies, into and out of Ireland.

“In addition, it is critically important that these services are operating when the economic activity resumes in the coming months and we prepare for Brexit.”

The Government stressed the financial measures being put in place are in compliance with the European Commission’s requirements under the emergency PSO arrangements and the emergency procurement arrangements published in response to Covid-19.

The Minister for Defence Paul Kehoe, who is a TD in Wexford, said the move is essential in order to keep the routes from Rosslare viable.

“This emergency measure is extremely welcome given the huge collapse in tourism that is affecting the entire industry,” he said. “It is also vital to ensure the protection of supply chains.”