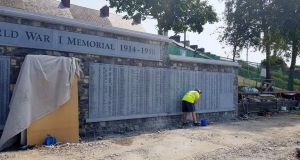 Putting the finishing touches to the war memorial in Kilkenny ahead of its unveiling on Sunday. Photograph: James Burke

Second youngest of the seven children of Edward and Honora Woodgate, Tommy was attached to the 23rd Training Squadron when the Royal Flying Corps joined forces with the Royal Naval Air Service to form the Royal Air Force.

About six months later, on October 10th, 1918, and just 32 days before the Armistice brought an end to hostilities, Tommy was returning to duty from leave when he boarded the RMS Leinster at Carlisle Pier, Kingstown, (now Dún Laoghaire), to make his way to Holyhead.

Besides Woodgate, there were 500 other military. In addition, the RMS Leinster had 76 crew and 180 civilians including children, 22 postal workers.

Sixteen miles into the journey, the ship was hit by two torpedoes dispatched by a German U-boat. One hit on the port side, prompting the crew to turn back towards Kingstown. However, a third torpedo then hit the starboard side, “almost blowing the ship to pieces,” according to a contemporary account.

Five hundred and one people lost their lives, including Woodgate whose body was recovered. He was buried at Grangegorman Military Cemetery in Dublin.

His date of birth, 31-12-1903, makes him one of the youngest of the Allied forces to be killed by enemy fire during the first World War. Tomorrow, he will be one of 827 Irish men named on a new war memorial which is being unveiled in Kilkenny city, honouring all those from the county who lost their lives during the 1914-1918 conflagration.

“We didn’t know he was only that age,” his grandniece, Joan Bryan, says now from her home on West Street in Callan, a short walk from the street where Tommy grew up. “I put him down on the family stone a few years ago and put him down as an 18-year-old. It turned out he wasn’t.”

It was only in recent months, when records were being collated of the Kilkenny people killed in that war, that the truth emerged. “I rang the deaths and births office and asked did they have his birth cert. I couldn’t believe it when it came back. I even thought it was a mistake. Then we got in touch with the parish priest in Callan and he looked up his baptism record. He was baptised the very day he was born. The two things couldn’t be wrong,” she said.

Her uncle, Seamus, who also lives in Callan to this day, is a nephew of Tommy Woodgate.

It was common enough practice for teenagers, eager to fight for the cause, to lie about their ages to recruiting officers, although it was rare for anyone as young as 14. Woodgate was probably influenced by the example of his older brother Martin – Joan’s grandfather.

The latter joined up, fought and survived.

Of the 827 men and boys from Co Kilkenny who died, Tommy was one of 66 teenagers, while five were nurses, three were chaplains. A total of 324 have no known graves having been killed in action.

Two local families lost three sons: the O’Connells from Maudlin Street and the Kavanaghs from Wolfe Tone Street. Both had other sons who survived. There were 28 families who lost two sons and three families who lost a father and son.

“There are 827 stories on the memorial because there are 827 names,” Donal Croghan, chairman of the Kilkenny War Memorial Committee, points out.

The idea for the memorial came in 2010 when Donal Croghan, Gary Lynch and Cllr David Fitzgerald realised there was no single record in the county for those who had lost their lives. “It was a simple idea but it took eight years,” Mr Croghan said. “It really only started in earnest in 2014 . . . It took a lot of work to get the memorial together and get a site. I’m glad it’s come to a conclusion in 2018, symbolically.”

Joan Bryan says she herself is “delighted” that all of the names from the county are being brought together in one place. “I think it’s great. We have our own memorial here in Callan, on Green Street near the parish church, and they [the Callan victims] are named on that as well.”

A third of the cost of the memorial came from local fundraising; the rest came from Kilkenny County Council.

Much of the research came from Kilkenny Families in the Great War, written by John Kirwan, Niall Brannigan and William Murphy, along with the work of leading war historian Tom Burnell. The latter donated his Kilkenny research to the committee, who in turn published it in book form to help raise funds.

The memorial is located at the Peace Park on John’s Quay in the city. It is fashioned from Kilkenny limestone by John Somers Construction Ltd, along with Kilgallen and Partners Consulting Engineers and monumental sculptors P Molloy and Sons from Callan.

It will be unveiled on Sunday at 1.50pm, with those attending asked to assemble from 1pm.