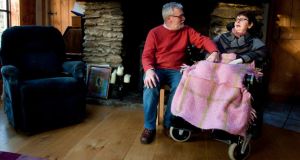 Tom Curran and the late Marie Fleming at their home in Arklow, Co Wicklow. “We knew that it had to come at some stage, but you’re never really ready when it does come,” said Mr Curran yesterday. Photograph: Garry O’Neill

Marie Fleming, who lost a landmark Supreme Court challenge for the right to an assisted suicide, died yesterday at the age of 59. Her partner Tom Curran said she died peacefully at home after her condition deteriorated.

Ms Fleming, a university lecturer who was in the final stages of multiple sclerosis, had gone to court to be lawfully assisted to have a peaceful death at a time of her choosing without putting loved ones who helped her at risk of prosecution.

Mr Curran said Ms Fleming’s condition had deteriorated dramatically since last March and was particularly poor in the past month. “We didn’t expect her to die as quickly as she did, but it was thought that she hadn’t got much longer,” he said. “While she had pulled through several similar situations, she just didn’t seem to have the strength this time.”

Ms Fleming died at 5.30am yesterday at her home near Arklow, Co Wicklow. “She got her wish,” said Mr Curran. “She died peacefully at home, in her own bed, and that was what she was fighting for. So what she fought for she achieved.”

Ms Fleming’s case attracted huge publicity, and her courage drew widespread admiration. Rejecting Ms Fleming’s claim last January, president of the High Court Mr Justice Nicholas Kearns described her as “in many ways the most remarkable witness which any member of this court has ever been privileged to encounter”.

Court plea
Earlier, the three judges on the case had deserted their dais in order to sit at eye-level with Ms Fleming and hear her plead to be spared a “horrible” death. “I’ve come to court today, whilst I still can use my speech, my voice, to ask you to assist me in having a peaceful, dignified death . . . in the arms of Tom and my children,” she said.

Ms Fleming had challenged the absolute ban on assisted suicide in the Criminal Law (Suicide) Act 1993. She argued that, as a severely disabled person unable to take her own life unaided, the law disproportionately infringed her personal autonomy rights under the Constitution and the European Convention on Human Rights.

She claimed the ban was discriminatory in that an able-bodied person may take their own life lawfully, but she could not be lawfully helped to do the same.

Ms Fleming was diagnosed with multiple sclerosis in her early 30s, but its symptoms were barely noticeable for a number of years. Her condition deteriorated, however. Twelve years ago, Mr Curran gave up his job and became Ms Fleming’s full-time carer. Her cognitive function was entirely unaffected, but by the time she took her legal challenge she had lost almost all her motor function.

The High Court heard that a collapsed shoulder impinged on her breathing and she took 22 pills each day to ensure her limbs were pliable and supple for the seven carers who came in to shower, toilet, dress and put her back in her wheelchair.

Medical card eligibility
Speaking after the Supreme Court’s decision, Mr Curran said it was a misunderstanding that his partner wanted to die. “She doesn’t have a death wish,” he stressed. “She wants to live. She just wants to control the way she dies.”

Last month, the Health Service Executive and Minister for Health James Reilly apologised for the distress caused to Ms Fleming after questions were recently raised by the executive about her continuing eligibility for a medical card.

Yesterday Mr Curran said: “We knew that it had to come at some stage, but you’re never really ready when it does come.”