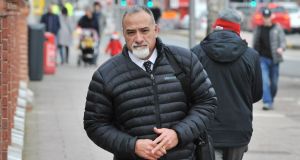 An American engineer working for a US pharmaceutical company went beserk after mixing drink with prescription medicines and put people’s lives at risk when he threw a fire extinguisher from a fifth-floor balcony into the lobby of a busy hotel.

Albert Santiago (54) went on a drunken rampage at the Clayton Hotel in Lapp’s Quay in Cork, causing over €13,000 worth of damage before flinging a fire extinguisher, wooden drawers, wooden table legs and picture frames from the fifth-floor balcony in to the lobby on August 12th last.

Santiago, from North Holdridge Avenue, Beechpark, Illinois, pleaded guilty to 11 counts of criminal damage, two counts of assault on staff, one count of engaging in threatening or abusive behaviour and one of being intoxicated in a public place as well as one count of endangerment.

Det Garda Cormac Crotty told Cork Circuit Criminal Court that Santiago, who was a highly specialist engineer, flew into Cork on the day in question to begin work overseeing an extension at an American pharmaceutical company in Carrigtwohill the following day.

He had one drink in the hotel and then went out to a bar where he had a number of other drinks. When he returned after 8pm, he began to abuse staff at reception and tried to grab a phone from a customer before pushing a female member of staff in the face.

He began pulling lamps and computers from the reception desk and then started throwing chairs about the place, damaging a glass door. He threw a metal bin lid at a male member of staff, hitting him in the chest but not causing him any serious injury, before going up to the fifth floor.

He picked up a fire extinguisher and started swinging by the hose, hitting off the walls, damaging the lift switch. He also damaged a hotel room door when he followed a terrified guest back to their room after they had come out to see what all the commotion was.

“He then threw the fire extinguisher and some wooden drawers and wooden table legs and pictures from the fifth floor balcony down on to the lobby below – there was a lot of panic and people had to be kept in the bar for their own safety – it went on for 40 minutes,” said Det Garda Crotty.

Santiago left the hotel, but gardaí arrested him a short distance away and he was brought to the Bridewell Garda Station. He was so intoxicated that a doctor deemed he was unfit to be interviewed and it was only the following morning that gardaí could question him.

Gardaí showed Santiago CCTV footage of his behaviour in the hotel and he was shocked and disgusted at what he saw, but he told them that he had no recollection of any of it and he was hugely apologetic as he had been staying at the Clayton every time he came to Cork on business, over a period of 13 years .

Det Garda Crotty agreed with defence barrister, Ray Boland BL that Santiago had paid a huge price for his actions as he had lost his job with the pharmaceutical company for whom he had been working in a well paid, highly specialist role for some 31 years and was now trying to set up his own business.

He accepted that as part of the company’s policy, employees were randomly tested for use of recreational drugs and there was no indication that Santiago had taken any such drugs, but he had been on prescribed medication at the time that he went on the rampage at the Clayton.

Mr Boland said that his client had gone drinking in a pub in Marlboro Street after leaving the hotel and he had been assaulted on the way back to the hotel and had become paranoid and was calling people “the devil” when he went beserk in the hotel.

He said that his client had already handed over $13,000 or around €11,000 in compensation for the hotel and he was willing to hand over another $5,500 in compensation to the hotel but he was very anxious to try to avoid a criminal conviction as it would affect his ability to travel and work abroad.

Judge Sean Ó Donnabhain said that he wasn’t sure that he could so far as to avoid recording a conviction against Santiago given the seriousness of the offences, in particular the endangerment charge, but he adjourned it until November 1st to allow him come up with further compensation for the hotel.