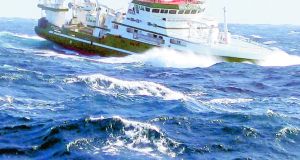 A “health check” of the Atlantic ocean by the State’s marine research ship Celtic Explorer (above) has found an increased penetration of man-made chemicals in the deeper ocean over a 20-year period. Photograph: Robert Bunn/Marine Institute

A “health check” of the Atlantic ocean by the State’s marine research ship Celtic Explorer has found an increased penetration of man-made chemicals in the deeper ocean over a 20-year period.

The team of international scientists on board the ship took samples on a 3,200km transect of the Atlantic between Newfoundland and Galway over the past four weeks.

The team found plenty of evidence of chlorofluorocarbons (CFCs) – even though they have been phased out since 1994.

CFCs, used in refrigerants and aerosols, cannot be broken down by the ocean, and are travelling deeper over time, according to Marine Institute head of marine chemistry Dr Evin McGovern.

However, there was an upside to this, in that measurement of the CFCs helped to inform the team on the age of water masses in the deep ocean.

“This helps us assess the uptake of fossil fuel carbon from the atmosphere and penetration into the deep ocean,” he explained.

Dr McGovern was principal investigator on the GO-SHIP A02 survey, which undertakes periodic checks to measure any physical and chemical changes in the world’s oceans.

The transect taken by the ship is one of 39 “global lines” studied by an international consortium of 16 countries and laboratories every 10 years, but it was 20 years since this particular section was surveyed.

The expedition led by the Marine Institute in Galway took 18 months to plan, and the ship encountered mixed weather as it stopped every 30 nautical miles (55km) to collect and measure samples.

The ship had four container laboratories on its rear deck to measure samples that will give an indication of the rate of the ocean’s acidification, caused by the uptake of carbon dioxide from the atmosphere.

The data will be assessed over the coming weeks and will be freely available to international research organisations, Dr McGovern said.

Marine Institute chief executive Dr Peter Heffernan noted that the survey finished early this week just four years after an Atlantic ocean research alliance between the EU, Canada and the US was signed in Galway. It is known as the Galway Statement.

The GO-SHIP A02 survey was jointly funded by the Government’s marine research programme, by the EU’s Horizon 2020 programme and by Canada.