The bomber: Salman Ramadan Abedi (22) was born in Britain

‘He was such a quiet boy, always very respectful towards me,’ says member of Manchester’s Libyan community 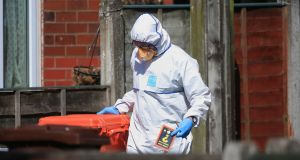 Police forensic investigator at an address in Elsmore Road, Greater Manchester. Armed police sealed off Elsmore Road and then carried out a controlled explosion at the terraced house where Salman Ramadan Abedi lived. Photgraph: Danny Lawson/PA

The man who murdered 22 people and injured 59 others has been named as Salman Ramadan Abedi. He was born in Britain and is of Libyan descent.

Police confirmed the 22-year-old’s identity after officials in the United States passed it to news reporters, apparently against the wishes of the police and security services in the UK.

Earlier, armed police sealed off Elsmore Road, a street in the Fallowfield area of south Manchester, and then carried out a controlled explosion at the terraced house where Abedi lived.

Salman Abedi is thought to have been known to both the police and the security services. A few hours after the attack, Islamic State claimed it had been carried out by “a caliphate soldier”.

Even before Abedi was named, several members of south Manchester’s Libyan community wondered whether the suicide bomber would turn out to be one of their own: perhaps one of the young men who had fought in Libya during the 2011 revolution, some of whom came home traumatised, angry and unsettled.

But none appear to have suspected that Abedi - a slightly withdrawn, devout young man, always respectful to his elders - would become a mass murderer.

“Salman? I’m astonished by this,” one member of Manchester’s Libyan community told the Guardian. “He was such a quiet boy, always very respectful towards me. His brother Ismael is outgoing, but Salman was very quiet. He is such an unlikely person to have done this.”

The brothers worshipped at Didsbury mosque, where their father, who is known as Abu Ismael within the community, is a well-known figure. “He used to do the five and call the adhan. He has an absolutely beautiful voice. And his boys learned the Qur’an by heart.

“Abu Ismael will be terribly distraught. He was always very confrontational with jihadi ideology, and this Isis thing isn’t even jihad, it’s criminality. The family will be devastated.”

“But what was he doing, murdering all those people. There must have been somebody influencing him. It’s terrible. He was off his head.”

Edwards said his mother’s house in the next street was shaken by the blast. “She felt the ground beneath her shake. She was absolutely terrified.”

Tina Ward (32), who lives on the same road as the raided house, said she came out of her home at around midday to see about 30 armed police entering the front garden of that house. She said it was home to a large Asian family with sons.

“They seem to be quiet,” she said. “I’ve been in my house 10 years and they’ve been there longer than me.”

Farazana Kosur said she and her children had lived on Thelwall Ave, around the corner from the house that was raided on Elesmore Rd, for four years. She knew the family in the house, she said, though not very well.

The family had sons in their 20s, and a younger son and daughter, and the older sons would wear religious dress and attend a mosque. The mother was a “very nice woman” and taught Kosur’s friend’s daughter to read the Qur’an.

“It’s terrible,” she said. “I hate the bombing and everybody is scared. It’s a nice area. We’ve had no problems.”