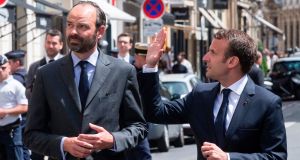 French president Emmanuel Macron and prime minister Edouard Philippe on their way to sign a book of condolences at the British embassy in Paris for the 22 people killed in the Manchester terrorist attack. Photograph: Etienne Laurent/AFP/Getty Images

Over 10 hours, with a break only to sign the book of condolences for the jihadist attack in Manchester at the British embassy, Macron explained his strategy for reforming the code to eight representatives of leading trade unions and business management groups.

After draining the life out of the established “parties of government”, the conservative Les Républicains and the Parti Socialiste, Macron may now be in a position to subjugate the country’s weak and ageing trade unions, who represent only 9 per cent of private sector workers.

The French labour code has swollen from 2,590 pages in 2005 to 3,334 pages at present. The UK and Germany have unemployment rates roughly half that of France. Macron believes the country’s chronic mass unemployment will not decrease unless employers are relieved of the fear of unpredictable high costs if they fire employees.

Macron would like to reinstate three measures that were dropped against his wishes when he was economy minister, from the El Khomri law which was named after the former labour minister last year.

All French trade unions say a ceiling on awards by the prud’hommes is a “red line” for them, including the moderate CFDT, which co-operated with the previous Hollande-Valls administration, and which is now the largest union in France.

The El Khomri law foresaw negotiations within companies on working hours and conditions. Unions objected to the measure vigorously because it undermines the power of sector-wide branch agreements. Macron wants to encourage more in-house agreements, for example allowing employers to hold referendums among employees.

Macron also wants to reduce the number of groups representing employees within companies, which include at least three different types of committees.

Philippe Martinez, the mustachioed leader of the communist CGT union, is the most ardent opponent of the reform. He calls Macron’s plan to legislate by directive in the interest of speed “unacceptable” and says deregulating labour would have no effect on unemployment.

The unions want to drag out the process. Macron wants to go fast. He hopes to draw up a draft law this summer, pass it by directive to avoid hundreds of hours of debate in the National Assembly, then have it endorsed by parliament in September.

When the unions object to the use of ordonnances or directives to speed up legislation, the Élysée notes that the late president François Mitterrand passed landmark measures in favour of workers, including the 39-hour working week, the fifth week of paid holidays and retirement at age 60, by directive.

In Brussels, Macron’s ability to reform the labour code is seen as a test of his credibility as a “European reformer”. Berlin, in particular, insists Macron put France’s house in order before he tackles European problems.

In its annual list of country-by-country recommendations published on Monday, the European Commission listed France’s failure to respect the stability pact, which limits deficit spending to 3 per cent of GDP. The commission said 54.5 per cent of French citizens of working age born outside the EU are jobless, and that they need better access to training. It criticised “barriers” to entering protected professions such as architect, taxi driver and accountant, and the difficulty of obtaining funds meant to favour innovation.

Attempts by Macron’s predecessors, Nicolas Sarkozy and François Hollande, to reform pensions and rewrite the labour code respectively, brought hundreds of thousands of demonstrators on to the streets.

Some fear that Macron’s attack on the labour code could spell similar unrest. But Macron has the advantages of being newly elected and popular. If he wins a majority in next month’s legislative elections, it will be difficult for unions to claim that they are more legitimate than he is.

And if Macron succeeds in establishing efficient social dialogue, sans the demonstrations, strikes and violence that have defeated past attempts at reform, he will be a truly revolutionary president.