Man in his 70s dies after tractor overturns in Co Wexford

Three people fatally injured in crashes in Kildare, Kerry and Dublin on Saturday 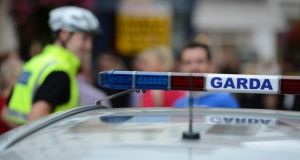 Crash occurred at about 1pm on Saturday on the Phibsborough Road. File photograph

Four people died in separate road crashes across the country over the weekend.

A man in his 70s died on Sunday after the tractor he was driving overturned in New Ross in Co Wexford. He was pronounced dead at the scene at Ballinabanogue shortly after 10am. His body was taken to University Hospital Waterford where a postmortem will take place on Monday.

Separately, another man in his 70s died in a single vehicle crash in Lattensbog, Adamstown, Co Kildare, at 7.25pm on Saturday evening. The man was the sole occupant of the vehicle and he was taken to Naas General Hospital where he was later pronounced dead.

Earlier on Saturday, a 50-year-old motorcyclist was fatally injured on the Ring of Kerry when his bike collided with a car between Waterville and Caherdaniel. He was pronounced dead at the scene. The occupants of the car were uninjured.

In Dublin, a pedestrian died on Saturday after being involved in an incident with a lorry and a car. The crash occurred at about 1pm on the Phibsborough Road. The 58-year-old woman was pronounced dead at the scene. The occupants of the lorry and car were uninjured.