Body of man was discovered on the Ranelagh road in Dublin at 4.40am on Monday 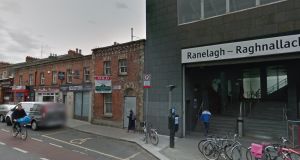 A 22-year-old man was found with a head injury beside the entrance to the Ranelagh Luas stop in Dublin on Monday morning. He later died in hospital. Photograph: Google Maps

A man who died after being found with a head injury in Ranelagh in Dublin yesterday morning is believed to have fallen from a rooftop.

The 22-year-old was unresponsive when he was approached on the pavement outside the Luas stop on the Ranelagh Road at 4.40am.

It is understood from CCTV footage that the young man climbed from the Luas tracks onto a nearby rooftop before falling to the pavement. It is believed the man was alone when the incident occurred.

He was taken by ambulance to St James’s Hospital where he was pronounced dead on arrival.

Gardaí have examined local CCTV footage and have described the man’s death as “a tragic accident”. They say the death is not being treated as suspicious.

The scene was preserved for technical examination and the Coroner has been notified.

A Garda spokesman said a postmortem would determine the handling of the investigation into the case.