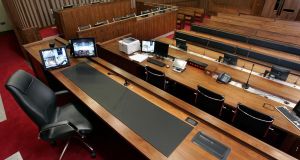 A homeless man told gardaí he attacked two elderly men in unprovoked incidents in Cork city centre because he believed older men were more likely to be sex offenders, a court has heard.

A homeless man told gardaí he attacked two elderly men in unprovoked incidents in Cork city centre because he believed older men were more likely to be sex offenders, a court has heard.

Garda Brian Barron told the court that Duggan first attacked a 75-year-old near the Gate Cinema at around 1pm. He ran at the man and rugby tackled him from behind, resulting in the man suffering several cuts and bruises. The man did not report the assault immediately as he was taken to hospital.

Some 90 minutes later, Duggan approached a 73-year-old man on Cornmarket Street and, without any warning, head butted him in the face, fracturing the man’s cheekbone in three places, Garda Barron said.

Duggan was arrested later that day and taken for questioning about the unprovoked assaults but his explanations were far from rational, the garda said.

“His reasons were hard enough to follow. They were a bit all over the place. There was no rational reason for the assaults. He agreed they were completely unprovoked. The explanation he gave was bizarre - that they were older men and more likely to be sex offenders,” Garda Barron said.

The court heard that Duggan had 95 previous convictions and Judge Seán Ó Donnabhain recalled that Duggan had previously pleaded guilty to an unprovoked assault on an older man in Cork in 2016.

Dermot Sheehan SC, defending, said his client had been released from Mountjoy Jail and that while a family member had offered him accommodation, he opted to sleep rough.

He was not able to access anti-psychotic medication at the time of the attacks as he had no medical card due to his chaotic life, counsel said.

Mr Sheehan said the the question facing the court was what fault attached to his client for not taking his medication given he had no means of accessing it.

Garda Barron said what concerned gardaí most about Duggan was the calculated manner in which he searched for his victims.

“He (Duggan) said that they were more vulnerable when they were elderly and less likely to fight back,” said Garda Barron.

The judge said a psychiatric report on Duggan shed little light on his problems other than that he was suffering at the time from sleep deprivation, which can trigger a deep seated psychosis. He said he was concerned about Duggan’s behaviour and his targeting of men in unprovoked attacks.

He heard that Duggan had been given a three year sentence with 18 months suspended for the aforementioned 2016 assault. Given the latest assaults occurred within the period of the suspension, he decided to activate the final 18 months of that sentence. He remanded him in continuing custody on the latest charges to appear in court again on November 6th next for sentencing.