Man (45) charged with murder of another man in Dublin

‘I didn’t do it’ was accused’s response to charge, court hears 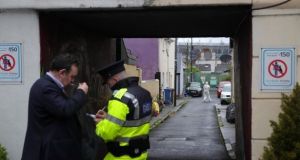 Gardaí at the scene of a fatal stabbing on Clinchs Court, North Strand, Dublin, on Friday. Photograph: Colin Keegan/Collins

A 45-year-old man has appeared at Dublin District Court charged with the murder of a man at Clinchs Court, North Strand, in the city in the early hours of Friday morning.

Anthony Paget of Carnlough Road in Cabra, Dublin, was charged with the murder of Aidan McMenamy at that location when he appeared in court on Saturday afternoon.

Det Sgt Padraig Cleary of Mountjoy Garda station gave evidence of the arrest of the defendant early on Friday morning and of charging him with murder on Saturday afternoon.

Det Sgt Cleary told the court the accused had replied: “I didn’t do it.”

A solicitor for Mr Paget told Judge Michael P Coghlan the accused had two requests, one for ongoing medical aid for injuries and the second for legal aid.

Judge Coghlan granted both requests and remanded the accused in custody to appear at Cloverhill District Court on Wednesday, July 24th.