Nasa will put a woman on the moon by 2024, says former astronaut 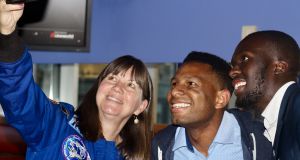 As a space-mad child, Catherine (Cady) Coleman missed the moon landings in 1969. She was eight going on nine and staying at her grandparents house in Virginia in the United States.

Her mother woke her brother up to watch the culmination of the Apollo 11 mission, but not her. “We remind her about it all the time, but she made up for it in other ways,” Ms Coleman says with a smile.

Her early disappointment did not deter her from having a dizzyingly successful life as a scientist and astronaut. She graduated from Massachusetts Institute of Technology(MIT) and the University of Massachusetts Amherst with a PhD degree in polymer science and engineering.

She was recruited in 1992 by Nasa to join their space programmes and completed 180 days in space. She remembers as a child that the moon landings made her realise the importance of space exploration, but it seemed to be not for her until she met the first American woman in space, Dr Sally Ride, who gave a talk at MIT when Ms Coleman was a student.

For the first time she realised she could be what she could see. “Wow, she seems to be somebody just like me. Maybe I could be that too,” she recalls saying to herself at the time.

Ms Coleman is one of our own judging by the capacity crowd of more than 700 who attended the aftershow screening of the documentary, Apollo 11, hosted by the US embassy in Dublin on Thursday night in Cineworld’s IMAX theatre.

She is a quarter Irish on both sides of her family “which somehow adds up to more than a half”.

An Post acknowledged her Irish ancestry by putting her image on a stamp along with her fellow Irish-American astronauts Neil Armstrong, Michael Collins and Eileen Collins to coincide with the 50th anniversary of the first moon landing.

In 1998 she met Padraig Moloney when he was working as a scientist with Nasa. He is the son of Paddy Moloney from The Chieftains. As chance would have it, she learned flute from an early age, so when she went on board the International Space Station (ISS) in December 2010 she took a tin whistle from Paddy Moloney and a flute from Matt Molloy, another member of The Chieftains.

At night she would retreat into a corner of the space station and practice a tune given to her by The Chieftains. The Chieftains in Orbit was on the band’s 50th anniversary album along with two other songs she recorded.

“The Chieftains made Irish music for the whole world and their music is part of all of us. That’s why I brought their instruments into space.”

Matt Molloy was in the audience at the IMAX theatre on Thursday.

The Apollo 11 documentary brought back memories for her as the same journey is taken to the launch pad by the Apollo astronauts as was taken by those who followed after them.

The Apollo space programme was decades ahead of its time in many ways and has not been surpassed as a technical achievement, but in other ways it was of its time.

All of the astronauts on the Apollo programme were men. The Soviets were ahead of the Americans in that regard as the first woman in space was Valentina Tereshkova in 1961. Sally Ride did not become the first female US astronaut until 1983.

The documentary depicts seas of male faces at mission control. Conspicuous by their absence were women or people of colour.

Ms Coleman says two women, who are not in the documentary, were central to the moon landings. One was the African-American mathematician Katherine Johnson who did the trajectory calculations for several manned space programmes including Apollo. She was so trusted that the astronaut John Glenn refused to fly without her calculations.

The other was Margaret Hamilton the woman who coined the term “software engineer”. She devised the back up programme which allowed Armstrong and Aldrin to ignore the famous 1202 alarm which went off just as the Eagle was about to land on the lunar surface.

Ms Coleman believes there will be a woman on the moon by 2024 as Nasa has pledged to go back to the moon by then as a staging post before going to Mars some time in the 2030s.

“I actually believe them. The US is committed to putting both a woman and a man on the moon. The moon is a stepping stone for getting to Mars,” she said.