Woman assaulted during incident at commercial premises in Balrothery 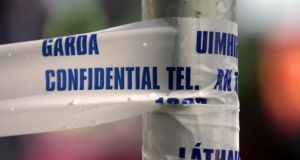 A man has been charged in connection with a robbery at a premises in Balrothery, Co Dublin, in which a woman was assaulted.

The man (44) was due to appear before Swords District Court at 10.30am on Monday morning.

The robbery occured at about 9.20am on Satruday when a lone male entered a commercial premises in Balrothery and demanded cash. He was wearing a balaclava and threatened a female member of staff.

He assaulted the woman and left with a sum of case. The victim did not require any medical attention.

Later, gardaí searched a house in Balbriggan and arrested the man.

Woman left in middle of nowhere after being raped by three Dublin teenagers, court told 18:56
Voting under way in the Dáil to elect the next taoiseach 18:50
Harris signs order to designate coronavirus as a notifiable disease 18:42
Patricia O’Connor murder trial: Jury asked to park ‘shocking’ nature of case outside door 18:37
Teenage girl (16) killed in Cork crash named as Kimberly O’Connor 18:30