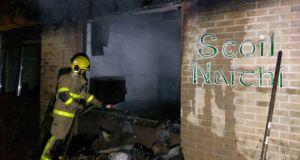 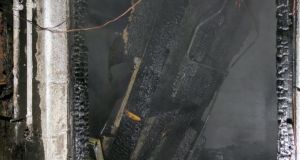 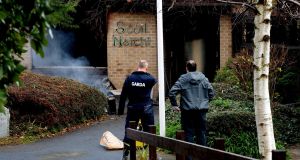 Gardaí at the scene of the fire at Scoil Naithi in Ballinteer on Monday morning. Photograph: Cyril Byrne /The Irish Times 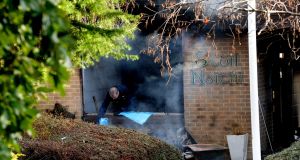 Gardaí at the scene of the fire at Scoil Naithi in Ballinteer on Monday morning. Photograph: Cyril Byrne /The Irish Times

A primary school in south Dublin has been “extensively damaged” in an overnight fire.

Four units of Dublin Fire Brigade were called to Scoil Naithí primary school on Stone Mason’s Way in Ballinteer after a fire was reported at about 4am.

A tweet from Dublin Fire Brigade said part of the school had been “extensively damaged” in the blaze.

A text was sent out to parents with children in the school informing them the school would be closed on Monday.

The school is now due to remain closed for the rest of the week following the fire.

Minister for Transport, Tourism and Sport Shane Ross posted on his Facebook page that he planned to contact Minister for Education Richard Bruton to establish what funds could be made available to reopen the school.

He wrote: “Absolutely devastating news about Scoil Naithí in Ballinteer. Thankfully, no one was hurt. I am going to get in contact with Minister Bruton today to establish what funds can be made available to ensure the school is reopened as quickly as possible.”

In a statement on Monday, Ms Martin said: “This is a terrible blow to the entire school community of Scoil Naithí in Ballinteer. The school was being examined and assessed when I called down to the site this morning. The Department of Education and Skills must do everything they can to support the school in every feasible way.”

The cause of the fire and the extent of the damage is unknown. However, according to a Dublin Fire Brigade spokesman, the period of time spent battling the blaze indicates there could be significant damage. It is understood the fire broke out in the office of the school building but is unclear how far into the building it spread.

Gardaí at Dundrum are investigating the incident and the scene has been preserved pending a Garda technical examination. A garda forensics team is also at the scene.

There are no road closures in the area.

There are 250 students in the southside Dublin gaelscoil plus an additional forty students in the Naíonra (pre-school). The school was founded in 1973 and was officially opened in 1980 by former taoiseach Charlie Haughey.