If you must fry or roast food do so only until golden, says FSA

Burnt offerings: Potential cancer risks can be reduced by boiling or steaming foods 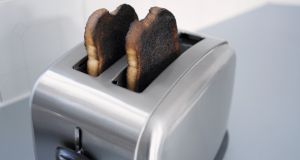 Potatoes and bread cooked at high temperatures for a long time could increase the risk of cancer in people who eat them regularly, scientists have said. File photograph: Getty Images

Irish authorities are working with the European Commission and member states to set controls on the amount of a potentially cancer-causing substance in starchy foods cooked at high temperatures.

Potatoes and bread cooked at high temperatures for a long time could increase the risk of cancer in people who eat them regularly, British government scientists said on Monday.

The UK Food Standards Agency (FSA) said a substance called acrylamide, produced when starchy foods are roasted, fried or grilled for too long at high temperatures, has been found in animal studies to increase the risk of cancer.

In a statement that drew criticism from some independent experts, the FSA said that, to reduce the danger, consumers should cook these foods at lower temperatures and eat them when they are cooked to a golden colour rather than browned.

“The scientific consensus is that acrylamide has the potential to cause cancer in humans,” the FSA said.

In Ireland, the Food Safety Authority of Ireland said it had previously carried out a total diet study to look at the exposure of the Irish population to certain chemicals, including acrylamide.

“Whilst we found the intake of acrylamide in Ireland is low, as in other EU member states it needs to be further reduced, and we are working with the commission and other member states to set controls for acrylamide in legislation,” it said in updated advice on Monday.

The agency said people could reduce the amount of acrylamide in their diets by choosing cooking methods such as boiling or steaming instead of frying or roasting.

It also said potatoes intended for roasting or frying should not be stored in the fridge as this could increase the amount of acrylamide formed during cooking.

“In addition, you can reduce your dietary intake of acrylamide by ensuring you have a balanced diet, with plenty of fresh fruits and vegetables.”

But some experts said there were far more well-established and significant foods and habits linked to cancer risk, such as smoking, drinking and being overweight, and consumers should focus on changing these above all else.

“Evidence from animal studies shows that acrylamide has the potential to interact with the DNA in our cells, so could be linked to cancer,” the charity Cancer Research UK said in a response to the FSA’s announcement.

“However, evidence from human studies has shown that, for most cancer types, there is no link between acrylamide and cancer risk.”

The World Health Organisation’s International Agency for Research on Cancer classifies acrylamide as a “probable human carcinogen”, putting it in the same risk category as using anabolic steroids, eating red meat, drinking very hot drinks or working as a hairdresser.