Two more held over shooting of PSNI officer in Belfast

One man has been arrested after a policeman was shot and wounded in Belfast. Video: Reuters 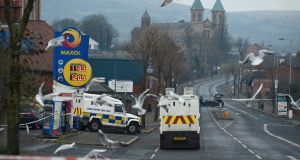 Police at the scene of the shooting at a petrol station on the Crumlin Road in Belfast. Photograph: Clodagh Kilcoyne/Reuters

Detectives investigating the attempted murder of a policeman in Northern Ireland have made two more arrests.

The men, aged 30 and 39, were detained in west Belfast in connection with the petrol station forecourt shooting of a young officer in the north of the city.

A 36-year-old man arrested in the wake of Sunday’s shooting remained in custody on Monday night.

The community officer was shot three times in the arm and commanders believe his body armour may have saved him from further harm. Detectives believe rounds may have been fired from behind a fence across the road from the petrol station on the Crumlin Road on as two officers emerged from the shop.

Dissident republicans have been blamed for the attack.

PSNI Chief Constable George Hamilton spoke to the officer on Monday as he recovered from emergency surgery.

“He is in good spirits,” he said. “I never cease to be amazed by the bravery and the professionalism of police officers like him that I come across on a day-to-day basis.”

Mr Hamilton said the victim was in a fairly serious condition and was injured on the right arm, suffering significant damage. He spent three hours in an operating theatre overnight and is expected to undergo more surgery in the days ahead.

Mr Hamilton added: “I would condemn this despicable attack, this act of complete recklessness as the filling station out on the Crumlin Road was riddled with high-velocity gunfire at 7.30pm when people were going about their normal business, going to fill their cars up with fuel and buy groceries for children’s lunches.”

He added: “Our police officers are citizens in uniform. This officer was a member of the community.

“He was attacked but other members of the community were at massive risk as well and the people who did this did not care who they murdered, albeit it was clear the attack was aimed at the police officers on duty.”

Police have appealed for anyone who saw an Audi saloon car in the area at the time to contact them.

Dissident republicans have killed several members of the security forces in recent years.