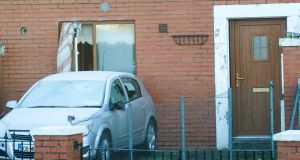 The house in the Dunard estate, Mayfield, Cork where a man was doused with petrol and set on fire during an assault that has left him with life changing injuries. Photograph: Provision

Gardaí in Cork have begun an investigation after a man was doused with petrol and set on fire in an assault overnight that has left him with life changing injuries.

The assault happened when three men, armed with what is believed to be a machete and iron bars, burst into a house in the Dunard in Mayfield at around 4am on Monday morning and began attacking a 23-year-old man.

The man suffered a number of serious injuries to his head and upper body before the gang raced from the house only to return and douse him with petrol before setting him alight.

The man’s family raised the alarm and he was rushed by ambulance to Cork University Hospital where he was put in an induced coma on a ventilator as doctors work to treat severe burns to his head and upper body.

Meanwhile two units of Cork City Fire Service were called to deal with a fire at the house in Dunard and the situation was quickly brought under control before the units returned to base.

The attackers fled in a black Ford Mondeo and a Citroen Berlingo van and were pursued by gardaí from Mayfield who lost them on icy roads near the Fox & Hounds pub in Ballyvolane.

However, gardaí have since recovered a Ford Mondeo and a Citroen Berlingo van at a location in the southside of Cork city and garda technical experts have begun a forensic examination of both vehicles for DNA and other evidence.

Gardaí have also sealed off the scene of the attack in Dunard and garda technical experts have begun an examination of the building while officers have also begun harvesting CCTV footage from the area.

Detectives have also been speaking to a number of people who witnessed the attack to see if they can identify the culprits who don’t appear to have been masked and may have been known to the injured party.

Gardaí say they are keeping an open mind on a motive for the attack but said they are investigating whether it may be linked to a personal dispute between two men in their 20s.