One arrest made after wounded man discovered by gardaí in Mulhuddart 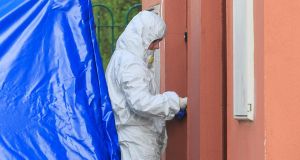 A garda at the scene of a suspected fatal stabbing in Mulhuddart, Dublin. Photograph: Gareth Chaney/Collins

A man has died following an a stabbing incident at a house in Mulhuddart, west Dublin.

Gardaí attended the scene at a house at Castlecurragh Heath, Mulhuddart shortly after 6pm on Saturday where the man, aged in his 20s, was discovered with apparent stab wounds.

The man was treated at the scene by emergency services personnel but was pronounced dead a short time later.

The office of the State Pathologist was notified and the assistance of the Garda Technical Bureau was requested by investigators.

A man in his 40s has been arrested in connection with the incident. He is being detained under Section 4 of the Criminal Justice Act, 1984 at Finglas Garda Station.