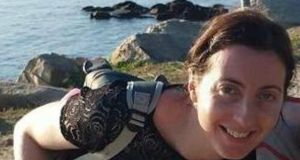 Marie Downey, who had epilepsy, was found dead on the floor of her room in Cork University Hospital. Her son, Darragh, was found underneath her and died the following day. Photograph: Facebook

Pregnancy has been likened to an obstacle course but for women with epilepsy the obstacles are stacked even higher during this period – and beyond childbirth.

An increased risk of seizures, the risk of foetal malformations linked to some anticonvulsant drugs as well as anxiety and depression are just some the challenges faced by women with epilepsy who are having children.

Yet with careful management, the vast majority of women with the condition in Ireland and other western countries will go through pregnancy and give birth without major difficulties.

Studies have found mortality rates during pregnancy are about 10 times higher in pregnant women with epilepsy compared with the general population of pregnant women but this translates to an absolute increase in risk of less than 0.1 per cent.

Specialist epilepsy nurses, for example, have been trained up to increase the knowledge base in many hospitals.

However, the tragic deaths of Marie Downey and her son Darragh in Cork University Maternity Hospital this week will inevitably raise questions about the management of some patients.

Ms Downey, who had epilepsy, was found dead on the floor of her room in the hospital on Monday morning and her son, who was found underneath her, died the following day.

Practice guidelines for Irish hospital staff say they must ensure a “safe environment” for a woman with epilepsy and her baby while in hospital. They also suggest the drawing up of birth and care plans for women that may include a proviso that the woman not be left alone with the baby in her bed.

This guidance accords with the broad thrust of clinical advice internationally on this subject, though some authorities go further.

The Royal College of Obstetricians and Gynaecologists (RCOG) in the UK, for example, says “postnatal mothers with epilepsy at reasonable risk of seizures should be accommodated in single rooms only when there is provision for continuous observation by a carer, partner or nursing staff”.

Ms Downey, who was a private patient, was accommodated in a single room in the hospital, and was alone in the room, apart from her son, when the tragic incident occurred last Monday.

The college – which is currently assisting in a review of tests carried out by the Irish cervical cancer screening programme – points out that while the overall chance of seizures during and immediately after delivery is low, it is higher than during pregnancy.

“Mothers should be well supported in the postnatal period to ensure that triggers of seizure deterioration such as sleep deprivation, stress and pain are minimised.

“Postpartum safety advice and strategies should be part of the antenatal and postnatal discussions with the mother alongside breastfeeding, seizure deterioration and AED [anti-epileptic drug] intake.”

The National Health Service’s Salisbury Trust says women with epilepsy should be encouraged to stay in hospital for 24 hours after delivery as they are still at an increased risk of seizures.

“Epileptic patients should not be cared for in single rooms ante/postnatally,” the trust advises.

In a similar vein, the Women With Epilepsy website says: “Unless the ward can accommodate partners overnight; you are not advised to stay in a single room because of dangers related to unwitnessed seizures whilst in hospital care.

“Let a staff member know if you require additional support to optimise your safety or if you feel at risk of a seizure. Conduct your own risk assessment for the hospital environment.”

Also in the UK, the National Institute for Clinical Excellence says “advanced planning, including the development of local protocols for care, should be implemented in obstetric units that deliver babies of women and girls with epilepsy”.

It adds: “Parents should be reassured that the risk of injury to the infant caused by maternal seizure is low.”

The exact circumstances of Ms Downey’s death have yet to be determined. The severity of epilepsy – and, consequently, the safety measures to be taken – varies greatly from patient to patient.

Even at this early stage, though, it is clear there may be issues in relation to the implantation of best practice in patient management vis a vis Irish and international guidelines.