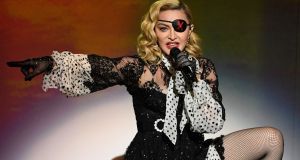 Madonna has rejected calls to scrap plans to make a guest appearance at Saturday’s Eurovision final in Tel Aviv on Saturday, insisting she would never “stop playing music to suit someone’s political agenda”.

Subject to a contract being agreed, Madonna is due to sing two songs during the break for judging at the event, which features singers and musicians from 40 countries and will be watched by up to 150 million people across Europe.

Musicians, including Pink Floyd’s Roger Waters, have called for a boycott of the competition, while pro-Palestinian activists insist that “true solidarity means heeding the call of the oppressed”.

So far preparations for the Eurovision have proceeded without any major incident, despite security concerns. Only a week ago rockets fired from Gaza were landing across southern Israel.

A ceasefire was reached with the militant groups before any projectiles were launched at Tel Aviv, to the huge relief of the Eurovision organisers. However, the US embassy in Israel has issued a travel warning of possible attacks, citing Eurovision as one reason.

Nakba Day takes place, too, when Palestinians mark the establishment of the state of Israel, the forced flight of hundreds of thousands of refugees in 1948 and the first anniversary of President Donald Trump’s relocation of the American embassy to Jerusalem.

Calling for a boycott, Palestinian academics said: “Israel’s decades-old regime of apartheid and settler-colonialism explicitly uses international artists and events to cover up its human-rights abuses.

“At a time when fewer and fewer major artists are performing in apartheid Tel Aviv, Eurovision is exactly what Israel’s far-right government needs to distract from its crimes.

“We urge you and all participants to withdraw from Eurovision.”

Defending her plans to sing, Madonna told Reuters: “I’ll never stop playing music to suit someone’s political agenda, nor will I stop speaking out against violations of human rights wherever in the world they may be.

“My heart breaks every time I hear about the innocent lives that are lost in this region and the violence that is so often perpetuated to suit the political goals of people who benefit from this ancient conflict.”