Sarah McTernan says Eurovision is ‘all about the music’ 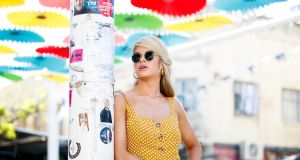 Irish Eurovision hopeful Sarah McTernan in Tel Aviv. She will perform the song 22 in the second semi-final on Thursday. Photograph: Andres Poveda

McTernan is recovering from a bout of gingivitis which led to gum inflammation, but she is confident it will not impact on Thursday’s performance of the Irish entry, entitled 22.

“Absolutely not. It’s good that it happened last week and not during the week of Eurovision. I’m on the mend now. Its just pushed me to focus even harder to get better ahead of the performance.”

Security is tight in Tel Aviv and around the country for Eurovision week. McTernan is reluctant to talk politics, stressing that Eurovision is “all about the music”.

“Everybody has their opinion on the issue, which is totally fine, but we’re about the music, and about spreading the love and the music, and that’s what Eurovision is about. We’re here, and we’re loving it.”

Just 5,000 or so foreign fans are in Tel Aviv, significantly less than hoped for by organisers. Just 30 have travelled from Ireland, according to Diarmuid Furlong, president of Ireland’s Eurovision Fan Club. Last year, 150 went to Lisbon.

“Numbers are down mainly because of the cost. When I first started travelling to the Eurovision, a ticket package cost up to €130. This year it’s about €900,” says Furlong, who has been to 18 of the last 20 finals.

However, he judges Tel Aviv to be his favourite city, so far: “It’s a totally different city than any we’ve been to for Eurovision. It’s a stunning location and people are really friendly. It’s one of the few Eurovision host cities I’ve been to that I would happily return to as a holidaymaker.

“The political thing I’m not going to get into because I really don’t understand it, to be honest. I had no qualms about coming to Israel and I think the whole Eurovision boycott movement was nonsensical.”

The organisation noted that over 60 Palestinians were killed during protests on the Gaza border on May 14th last year, the same day Israel won the Eurovision contest in Lisbon, securing the right to host this year’s final.

Boycott activists will be stopped from entering Israel. “If we know for certain that we will be facing people who are anti-Israel activists and whose sole purpose is to disturb the event, then we will use the legal instruments that we have regarding the entry to Israel,” said foreign ministry spokesperson Emmanuel Nahshon.

The Israeli government has confirmed that it is running an online campaign to discredit boycott efforts by the BDS (Boycott, Divestment, Sanctions) movement.

The initiative posts advertisements on Google which appear to be in support of the boycott movement, but which link to a pro-Israel site which describes Israel as “Beautiful, Diverse, Sensational”.