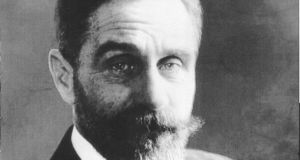 The remains of Roger Casement were exhumed and returned to Dublin in 1965. 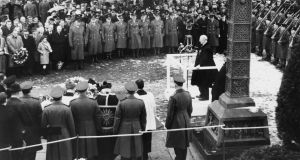 The macabre exhumation of the remains of Roger Casement in Pentonville Prison in London in 1965 is recounted in detail in the latest volume of documents from the archives of the Department of Foreign Affairs.

Casement, who was landed from a German submarine at Banna Strand, was hanged for treason in the aftermath of the 1916 Rising. The return of his remains to be buried in Ireland had long been sought by Irish governments and it was finally agreed by the British prime minister Harold Wilson in 1965.

The duty of observing the exhumation fell to Paul Keating, then a diplomat based at the London embassy. In a memo sent on March 4th, 1965, he recorded that he went to the prison at 5pm on the evening of February 22nd with other Irish and British officials to supervise the dig.

The Home Office officials present expected to find a layer of charcoal near the body as they understood lime was not used at the date of Casement’s execution. They believed the grave would be 10ft deep and the soil was typical London clay, which was heavy and difficult to dig.

“Two teams of prison officials dug steadily and at about 7.30 were surprised to come across a layer of lime. Immediately below it was a very thick mud and water floating on top of it there appeared two small black objects which on examination by a doctor turned out to be two bones of the thumb.

“By this stage the bottom of the hole excavated became full of water and it was necessary to send for a pump... After the grave was pumped out gradually we began to come across the remains. At this stage the diggers had left a step at each end of the grave and were excavating mainly in the middle. In this hole in the middle we came across the arm bones, the bones of the pelvis and many ribs and vertebrae. We also came across the thigh bones. These were all extremely well-preserved by the action of the lime though very much blackened by it and encrusted with soil and lime itself.

“We got some water and had them washed and dried and put in the coffin. They were not all together since the flesh had disappeared and the bones were no longer articulated. It also appeared that one of the workmen in his excitement had disturbed them with his pick-axe. This is understandable in view of the impossibility of seeing them in view of the muddy mess of water in which they lay and also in view of the unpleasantness of the unaccustomed job which he was performing.

“However, at this stage it became a matter of some delicacy to find the head and if possible to see that we preserved it as intact as possible...

“... When this was done and the bones were washed we felt that we had practically all of them that could possibly have survived the action of the quick lime and of 49 years in a waterlogged grave.”

Keating said the question remained whether these were in fact the bones of Casement. “On this matter, I have no doubt. There is first of all the identification by the British authorities of his grave and the fact that [they] obviously did not have any idea of what would be found. In addition the hair would seem to identify him as also would the fact that the leg bones were obviously those of an extremely tall man. It may be of interest to record that one of the grave diggers said that one of the leg bones looked as if it had broken at some time and reset.”

The next day the remains were flown to Ireland. An elaborate State funeral followed on March 1st, with the coffin brought through the centre of Dublin, where huge crowds had gathered, before being interred in Glasnevin Cemetery.

Taoiseach Sean Lemass wrote to Wilson to express his appreciation. “The Irish people warmly welcomed your decision which, as I stated in the Dáil, represented yet another step towards the establishment of the closest and most friendly relations between the two countries.”