‘I will not betray my members... James Connolly wouldn’t have done it’, says Jack O’Connor 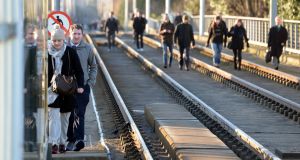 Luas customers face protracted stoppages over the coming weeks and months, according to a top Siptu official. Photograph: Eric Luke / The Irish Times

There has been a “fundamental breakdown” in talks between staff and the employers and the relationship between both sides is now “strained” and “fraught”, he said.

“It is very intractable, very difficult. It is getting more and more serious for everybody. The question that has to be asked is how sustainable is it to have a lengthy period of industrial unrest,” he told Newstalk Breakfast.

The issues of concern to his members, he said were the lower pay scales for new entrants and uncertain productivity rates. There are many issues that need to be fully clarified such as what will happen with the Luas extension, he said.

“We would prefer a full review about the new extension - there will be new depots and rosters, all of which will need to be clarified.”

When asked if he had thought the agreement reached at the WRC last week was a good deal he said: “After 27 hours we agreed it was the best that could be achieved at that point in time. We felt it was important that after four days of talks that the members themselves have their say.

“Two days before the ballot officials and driver reps explained the details to staff so the could make an informed decision - they decided emphatically.”

He said there will be no Luas services on Easter Sunday and Easter Monday with further disruptions the following weekend and two further dates in April.

Transdev managing director Gerry Madden said the rejection of the settlement proposals had “very serious implications” for the company. He said it would consider the situation over the weekend. He ruled out a replacement bus service.

Transdev said the WRC proposal would have provided for substantial increases in pay and were at the outer limits of what the company could afford. “For example a driver on €42,247 would have seen an increase to 50,000 by January 2019 plus a bonus of €3,250.”

It is understood drivers believe the company could give more. Luas drivers rejected the WRC proposals by 99 per cent.

Minister for Transport Paschal Donohue said he will not put the cost of the dispute on the taxpayer.

“I’m not going to take out the chequebook of the taxpayer here to resolve an issue and in so doing create massive costs for the taxpayer in the future and undermine our ability to resolve issues like this across our entire economy,” he said.

He called on trade union leaders to intervene in the Luas strike planned for Easter Sunday and Easter Monday.

“The period coming up is unique. It is commemorating formative events that led to the foundation of our State, they will be led in a tone of respect. They promised to be inclusive and intensely memorable.

“The same spirit of respect and inclusivity should now to be shown to the people who want to get in to these events, to participate in the ceremonies. Because of the events of yesterday I am now calling on the leaders of Siptu to engage in this and reinstate the services,” he said on Newstalk Breakfast.

“It is now at the level that it requires the response of those at the very top of Siptu whether it be Jack O’Connor or any of his colleagues. We saw Siptu and their members in the run up to St Patrick’s Day recognise that it was a special event, services were reinstated even though no agreement reached.”

“We still have 48 hours - everybody engaged in this issue now needs to take stock of where we now are,” he said.

“It will be unbelievably disappointing if people cannot attend these significant commemorations. This is a centenary, these are special events that are going to have a special place in the heart of people in our country.”

“For me as Minister for Transport the prospect of indefinite strikes is not acceptable for how we deliver public transport services in our country. We will need to take stock of that and reflect on that in the coming days,” he said.

Responding to Mr O’Donohue on Friday, Mr O’Connor said resolving the Luas strike is not an insurmountable task and the solution is in the hands of people who can improve the proposals.

He told the Sean O’Rourke Show on RTE Radio One that he would be happy to engage in any talks “to address the inadequacy of the proposals”.

“The Minister called on me to engage in talks, not to call off the strike. I am ready to drop everything and get involved in talks.

“I’m happy to address the inadequacy of the proposal.”

He went on to emphasise that the proposal was for ten percent, not 18 per cent.

“It is ten per cent over 39 months, not 18 per cent. . . The proposal itself is regressive. The new entry rate for recruits is lower than the current lowest rate of pay. It would help if the actual facts were being properly reported.”

He said that if necessary he would attend talks himself but that there were experienced trade union representatives ready to engage in talks - “but there is no one to engage with”.

He pointed out it was against the rules of the trade union for him to direct the Luas drivers to go to work on Easter Sunday and Easter Monday.

“I have a responsibility not to abandon the members of this union.

“The next 48 hours should be used to address the inadequacies of this proposal. They don’t need 28 hours like before. It has been narrowed down to very specific inadequacies.

“Every hour that people are running to radio stations could be used to negotiate.”

Speaking on The Pat Kenny Show Mr O’Connor said: “I will not betray my members to be popular.

“It is ironic that this happening at this time. James Connolly fought for the right to engage in collective bargaining and to withdraw labour.

“It is not open to me to betray people in the heat of battle. James Connolly wouldn’t have done it.”