Loyalists told Charles Haughey MI5 ‘asked us to execute you’ 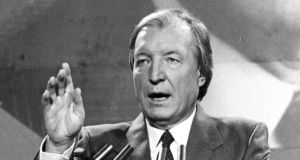 Charles Haughey was told by loyalist paramilitaries 30 years ago that MI5 had ordered his assassination, declassified state papers show.

Records from his office while he was taoiseach in 1987 reveal that the UVF wrote to him to tell him that British intelligence also launched a smear campaign against him.

The loyalists claimed their organisation was used by MI5 and MI6, backed up by British army special forces, from 1972 to 1978 and again in 1985.

“In 1985 we were approached by a MI5 officer attached to the NIO (Northern Ireland Office) and based in Lisburn, Alex Jones was his supposed name,” the UVF said.

“He asked us to execute you.”

The previously secret letter, on UVF headed paper, showed the loyalists told Mr Haughey that the MI5 operative gave details of his cars, photographs of his home, his island, Inishvickillane, and his yacht, Celtic Mist.

“We refused to do it, we were asked would we accept responsibility if you were killed we refused,” the UVF said in the letter.

Signed in block capitals “Capt W Johnston”, the name used by the UVF in all its formal statements, it closed with the line: “We have no love for you but we are not going to carry out work for the Dirty Tricks Department of the British.” - PA