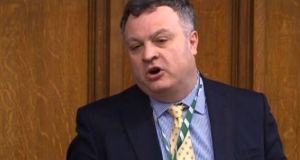 Alliance deputy leader Stephen Farry was among the politicians in the North to be threatened. Photograph: File/AFP via Getty Images

Loyalist paramilitaries have issued threats to Assembly members in the SDLP, the Ulster Unionist Party (UUP) and Alliance.

Following on threats issued against journalists in the Belfast offices of the Sunday World and the Sunday Life, the UUP leader Steve Aiken and his MLA colleague Doug Beattie, Northern Assembly SDLP deputy speaker Patsy McGlone and North Down Alliance MP Stephen Farry have been warned by the Police Service of Northern Ireland (PSNI) that they are being targeted by loyalist paramilitaries.

The threats, according to senior sources, were issued by elements of the Ulster Defence Association (UDA) in south east Antrim.

It is believed the four Assembly members were targeted after they were vocal in condemning the threats against the journalists.

These threats, it is understood, are linked to the Sunday Life and Sunday World coverage of the murder of 47-year-old Glenn Quinn in Carrickfergus in Co Antrim in January - a killing for which the south east Antrim UDA was blamed - and other drugs and criminal activities by that group.

Mr McGlone said that neither he nor journalists who have received threats in the past week will be silenced or censored. The Mid-Ulster MLA said police informed him of the threat on Sunday night.

“This is not the first time I’ve been threatened by paramilitaries but I can assure those responsible, I will not be silenced, censored or intimidated by faceless thugs,” he said.

“In the week of VE commemorations, it is ironic and deeply sinister that they have chosen to mimic fascist attacks on journalists and elected representatives.

“This threat, and the threats made against journalists in the last week, are an attack on the democratic tradition on this island. It must be resisted and those responsible must understand that they will never win,” said Mr McGlone.

SDLP Leader Colum Eastwood said those responsible for the threat obviously didn’t know Mr McGlone. “He will not be broken or silenced by those intent on intimidating him and others,” he said.

“These thugs need to understand that every threat against an elected representative or a journalist or anyone else is an attack on our peace and an attack on the democratic will of the people of this island. It is a fight they will never win.

“The threats made against Patsy and a number of journalists in the last week should be lifted immediately. Everyone on this island should be able to live and work free from the threat of violence,” said Mr Eastwood.